WE HAVE A NEW ADDITION TO THE TEAM

After thinking about it for some time and enjoying our RZR 570 in Arizona, we decided to buy another RZR for use in BC.  I will be selling the old Can-am; in theory it is already sold to my nephew Logan.  I have really enjoyed the Can-am over the years but we wanted something more comfortable for Aileen to come along on some of the rides.  We decided we were past doubling up on a quad even if it was set up to carry two people.
After the big wedding reception a couple weeks ago, we moved up to Campbell River for most of a week, parking at Cousin Bill's.  We were fortunate to take part in his annual summer barbecue and meet some of his family and friends who we have enjoyed meeting over the years.  Aileen and I visited Pete and Wendy who live a little ways around the corner from Bill.   Wendy is my sister in law Sheila's cousin and we have met them several times in the past.
Leaving Bill's on Wednesday this week, we moved up to Port McNeill and are again in parked in Cluxewe Campsite.  We didn't expect to be able to get into the campsite this time of year but Aileen's nephew Dennis had rented a spot for a month then decided to do some renovating at home and offered us two weeks in the site.  Such a deal!
So now I have two brothers in law named John with us here.  John F is married to Aileen's sister Anne.  They live in Port McNeill and they have their trailer here year round at Cluxewe.  John R is married to my sister Susan and drove up yesterday from Coombs to join us riding for a few days. Our son Richard and granddaughter Georgia came up to spend a few days with us too.  Richard and John R have gone golfing this morning then we all will go ATVing this afternoon.
John F and I took our machines out Wednesday evening so I could have a first ride in the new RZR.  Instead of the improving weather we thought we were heading to, we ended up in a downpour and had to don the rain gear right off.  Needless to say, the RZR got well covered in mud.
Yesterday morning, John F and I took our machines and did an obscure trail we had last ridden three years ago.  It had grown up with salmon berries bushes and in spots was difficult to find while driving.  There were several windfalls we had to remove.  We should have taken a chainsaw but did have an ax and a little twelve inch handsaw.  It took us well over two hours to go two kms.
After supper with everyone back at the campsite,  John F and I took our machines and went back to the same area but using a better road to enjoy the evening light over the inland ocean.  John R rode along with me. 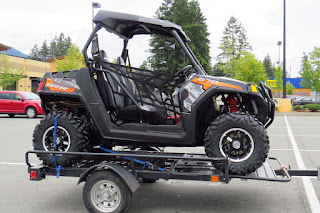 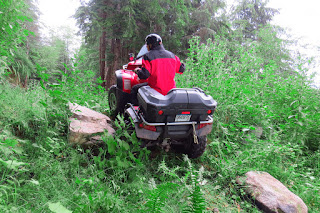 At the start of the old trail, they had put in some major water bars to channel the runoff water.  An over zealous operator made it a bit of a challenge to climb over, especially with the longer wheelbase on the RZR.  I ended up taking a run at it and flinging myself over.  Good thing for skid plates! 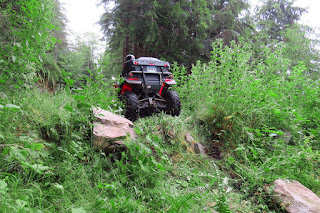 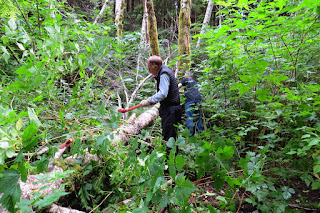 The largest tree that lay across the trail.  It was 14 or more inches at the center of the trail so the guys cut it further up where it was much smaller.  The roadway was extra wide there so we could deviate for the normal path. 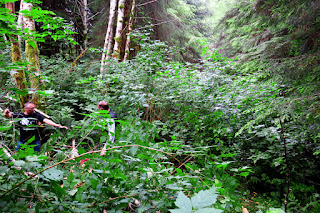 The center of the old road is right over that bright leaf in the foreground.  My RZR is actually in that thick brush waiting to push its way through. 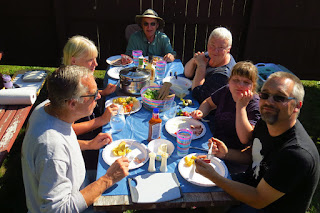 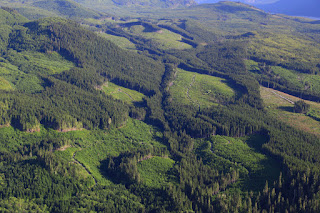 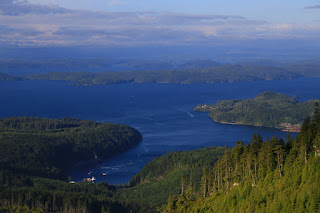 From our viewpoint on Elephant Mtn looking down on Beaver Cove 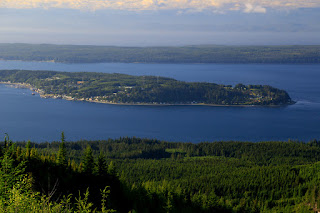 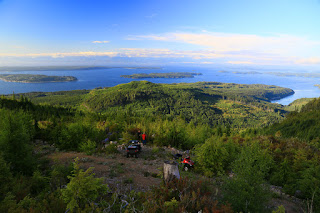 Alert Bay on the left and Beaver Cove on the right 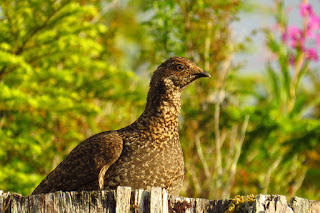 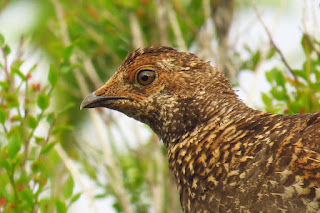