BACK ONLINE WITH A NEW COMPUTER 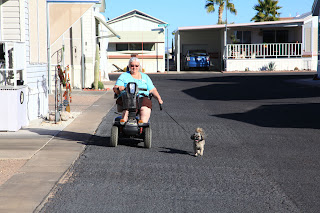 Aileen and Mitzy cruising the streets 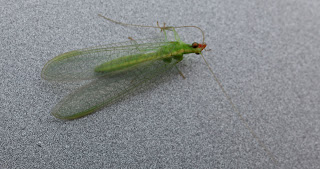 A Green Lacewing sitting on our car. Notice how he is holding the one antenna down so he can clean it

We went to the special ATV potluck on Monday with some of the guys from Ride Now Power Sports who came and rode today. There was tons of food left over. It was good to get out and see so many of my friends. There were lots of compliments on how I look and people happy to see me up and about already. I guess some people take quite a while to get mobile again.

Shortly after 10 on Wednesday we headed off to Phoenix. We found a Safeway for a few items then PF Changs for lunch. Aileen enjoyed the gluten free menu and the food was tasty.

From there it was off to the airport. We parked in the East Economy lot and took the shuttle over to Terminal 4. We didn’t have too long to wait when our daughter Bev came along. We had to stop at a McDonald’s as she hadn’t eaten. Just after 3:30 when we arrived at home. Phyllis, the editor, brought over a Chatterbox for proofing just after we got home so I got at that after taking Mitzy to the dog park. I took the Chatterbox back to Phyllis as soon as I was done and showed her the corrections required.

I’ve been without a computer for a few days. Mine was starting to fall apart so I made the decision to buy a new one. We drove over to Best Buy in Casa Grande on Thursday and bought it. I took it to Doug’s Computers afterward, along with my old computer, and they got to work cleaning up the new computer and transferring my data from the old one. When we went to pick up the computer late Friday, I forgot to buy the Microsoft Office pack so still couldn’t do any word processing until today when we went to WalMart in San Tan Valley.

We went for supper Friday night at Picazzo’s Pizza which has a great gluten free menu. The food was very good too. It is more of a challenge finding good restaurants now that Aileen is following the gluten free diet. Aileen has found out a lot of good information at the gluten free support group here in the parks. She has been told of several restaurants which have good gluten free menus. She is feeling much better since starting to pay attention to the gluten issue.

Bev and I went to the pool mid afternoon yesterday. She lay in the sun and read while I actually went in the pool and hot tub (first time since before Christmas) then lay in the sun too. Bev and I also went to the library for a batch of books. Bev came with me to the music jam today and I thought there were some pretty good performances.

I was lucky enough to sell two of my large framed prints in the last week or so. That helps to cover some of the expenses. Mitzy and I go for a walk from here out into the desert every morning. I have a special little backpack which is hers and contains doggy bags and a bottle of water and a little dish. With her short nose, she tends to dehydrate quite fast so we have to be vigilant with the water. When I ask if she needs a drink, if she does she licks her lips. If she doesn’t then she ignores me.

Several of our neighbours have gone on a New Zealand cruise (lucky people) so it is a little quieter here. One couple and their friends have tagged on a trip to Australia right after. It sounded pretty ambitious with flights to many of the Australian highlights over a two week span. I suspect they will be worn out when they finally return. They should be back a day or two before we head north in late February.

It’s great having Bev visiting us for two weeks and really fortunate for me with the new computer since she is a lot more savvy than I am. You will notice her influence in the new look of my blog. I’ve gotten behind in my blog reading/snooping the past few days. It’s amazing how deprived you feel when the computer is gone if even for a short while. At least we have a large library in the park so it is easy to find good reading material.

Posted by John and Aileen on the road at 6:47 PM