A LITTLE BIT ABOUT MY PHOTOGRAPHY 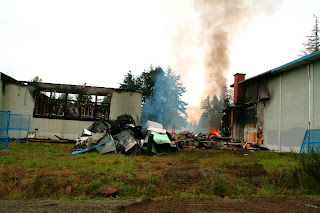 What's left of the Errington School 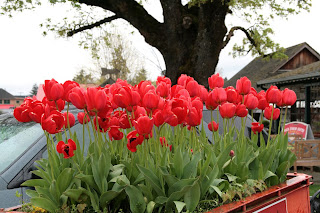 The subject, a cart of tulips in a cluttered area - below are some things one can do with a scene like this. Mostly it is to simplify the image or try a different angle - go low to remove cars and buildings. I used a 10 meg camera with an 18-125 (35 mm equivalent) lens, really nothing different than most other cameras. 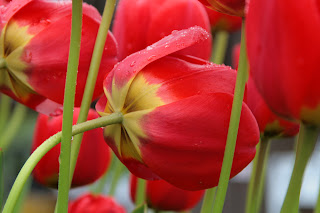 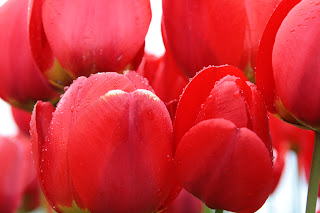 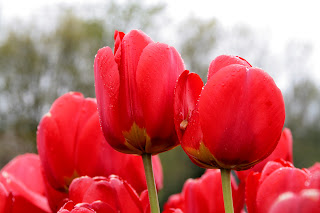 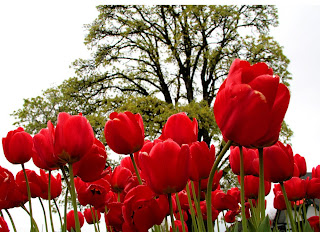 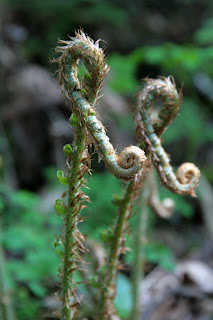 New fern growth
If you read the nice comments from Jerry and Suzy last post, I will give a little insight into my photography. I got my first camera when I was 12 or 13 for $1.50 and two cereal boxtops and have enjoyed photography ever since. I kept it as a hobby only, although I did get talked into doing a few weddings from time to time. I had my own darkroom for over 20 years and for many years was teaching others. I switched to digital when I retired in late 2007 and I've been behind ever since! I have averaged nearly a thousand images a month since then. I started with a Canon Rebel XTi, which I still use for all my ATV trips and whenever I need less weight or presence. My main camera since June 2009 is a Canon 5D which is 21 megapixels. It is overkill in a lot of cases, but it gives me the ability to make fabulous 13x19 prints, which my printer will do. I tiddly up all my pictures before presenting them using Adobe Photoshop Elements 7. I usually do a little in Levels, perhaps a slight change to colour saturation then sharpen every one. For posting to the blog or emailing, I reduce the image size to 999 on the longest side. All today's images were shot with the Rebel using a cheap Sigma zoom lens.

Aileen drove herself to church in Sunday morning. I caught a ride with Chas and Sheila up to the fair grounds for the Farmer’s Institute Auction. I didn’t recognize anyone other than family and in-laws at the sale. Lots of junk and it was surprising how high some of the plants went for. There were lots of poultry, but mostly stuff people were trying to dispose of such as roosters and old hens. There were lots of rabbits, some turkeys and a bit of livestock as well.

After a while, I went to the Coombs Market (a local tourist mecca known for its goats on the sod roofs) to wander around and met Bev, one of our Okanagan friends, sitting on a bench with her crutches. She’d recently had her second knee replacement. Carole, her partner, showed up later in company of their two lady friends from . Bev and Carole are enjoying a week down from .

I visited back at the sale with my brother Sam then distant cousin Garry for awhile. It was getting on for 2 when Aileen arrived and she and Barb (Garry’s wife) had a good chat. We wandered home just after 4 and Aileen made supper in the house as Sheila was working at the sale til almost 6. I barbequed steaks and they were very good. Aileen made her famous oven roasted veggies and salad.

Aileen has been puttering away on the family diaries again and has picked up the pace a bit more since Chas told her how much he has enjoyed them. My Dad started the diary before I was born and Mom took it over in the late 40’s. There was the odd year taken off but it has been pretty constant since the early 50’s. Aileen being the faster typist (actually a real typist) does the initial typing and I come along behind to proof and print. It has been an interesting challenge as lots of the old diaries are fading badly as Mom used whatever was handy to write in, often school scribblers, and the old inks either ran or faded, sometimes both. There were times in the earlier ones where I would have to hold the page up to the light to discern what was written and then quote it to Aileen. Mom’s writing was often difficult to decipher as well. In recent years she has gone to printing quite neatly. The amount of family and local history makes for lively reading and sometimes there’s some humour at family members’ expense. Mom tended to tell it like she thought in her writing, so the odd time some of us were spoken of rather directly. She did tell me at the beginning to clean up the structure as I liked but not to alter any details because that was how she saw things. I started proofing this week beginning with January 1993 at page 4403. I have done up to page 4458 so far. These are solid pages done both sides and we have used a lot of paper and ink over the years we’ve been working on the project. Mom was still writing the diary until after the dementia got the better of her so we still have a long way to go. I packed my printer into the house and will hopefully leave it set up for a few weeks.

We went to the Shady Rest Pub right on the beach at Qualicum to meet Bev and Carole for lunch on Monday. We managed to get a window seat in the north end and had the little room all to ourselves the whole time. Aileen and I both had cod and chips which were really good. We spent about 2 ½ hours chatting inside and another ½ or more outside. Those two are fun to visit so it was great to be able to get together over here on the , as we couldn’t fit it in while in the interior. Bev still needs crutches most of the time but is getting around well. Carole is retiring in August, I think, shortly after her 65th birthday.

On Tuesday morning we’d heard sirens in the night which turned out to be the long closed on fire again. Somebody had torched it a few months ago as well. This time the job is pretty complete. What didn’t burn down is gutted. Chas came over soon after we were up to ask if I wanted a trip to today. Of course I said “Sure!” We went to Capital Iron where he bought a tent after we set it up. I found a nice blue vest for Aileen for $19 and a nylon reversible vest for me at half price - $18.50 – and it fits perfectly. We had been looking for a vest for Aileen since and were wondering if they still made them even, as no stores had any new stock, just the odd one they hadn’t been able to sell.

After lunch on Wednesday, I went to . It took a couple tries to get Mom to agree to going to art. At first she said she wouldn’t go so I left. When I came back a while later, she was more agreeable and I was able to talk her into going. I got Dad from the dining room and parked him in the sun at the end of the hall. He’d poked another old guy on the rim of his ear from behind as we were leaving the dining room and the old guy just about went through the ceiling. Dad gave a couple hee hees. As soon as the sun hit him, he said “Ahhh” so I guess he really enjoys it. Then as I was visiting him in the sun, he asked “what happened to your hair?” I told him Aileen cuts it short. He said oh, and went to sleep. I dropped Mom at Arlene’s in Qualicum and since I didn’t seem to be invited in, I went to the Old Schoolhouse Gallery for most of two hours. Visited with a couple of artists and looked things over well. When I went back for Mom just after 3:30, she’d been pacing worrying about me, they said. They are very good to her and she does enjoy visiting with them. She’s been art friends with some of them for 30-40 years. I delivered her back well before 4:30.

Our little baby, Bev, turned 38 yesterday. Aileen spoke with her after supper for awhile then Chas, Sheila and I sang happy birthday to her. We’re hoping to take our grand daughter, Georgia, for a picnic tomorrow and see our son Richard and wife Robin as well for awhile.