When Charlie and Sheila returned from their holiday, we moved back down to Duncan and are parked at Cousin Neil and Carol's.  We have more things we want to do in this area before we leave the Island in early September.
We had a great visit today from Aileen's cousin Lorene and her husband Tony.  They are at the point where they are starting to think seriously about an RV and rented a 23 foot Class C to get a feel for it.  Not surprisingly, the corner bed is a no go.  Renting is a good way to separate some of these issues before spending a pile of money then having to trade up fairly soon.
We had Georgia for six nights.  We got her out hiking several times and even saw some new to us spots, courtesy of John R and my sister Sue.  Blackberries are ripe everywhere and Georgia loves her berries.
Yesterday we had lunch in Nanaimo with our RV group of friends.  It was nice to catch up on what's happening.  Just a week and a half now until our Fall RV Rally at Seal Bay.  This will be our last rally for a while if our current plans to not bring the motor home over to the Island next year follow through.  We want to do some travelling in the rest of BC and the north.  It seems once we get to the Island, we are here for the duration as there are so many things that we want to do.   It is too expensive to use the ferry more than once a year, although we have done it before. 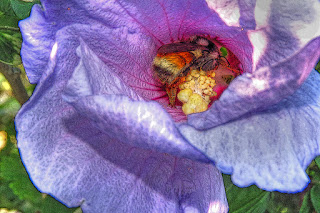 While walking at dusk the other day we spotted this bumble bee hunkering down in a Hibiscus flower.  It is one of those things you don't really think about.  Where do flies and bees etc. spend the night when it is damp and chilly?  We watched several others selecting their bedrooms too, though most were going into flowers that were already closed for the night. 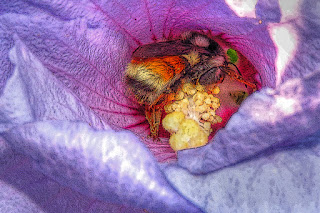 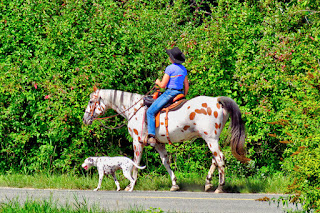 I have seen this spotted horse/spotted dog combo going past the motor home numerous times but always the other way so I didn't have time to get a shot.  This time they were going the other direction and I spotted them across the field as they approached Charlie's driveway giving me enough time to grab my camera and run out into the yard. 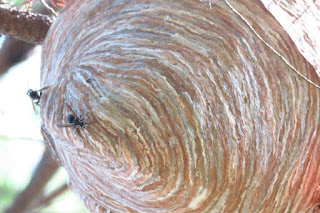 While out on a walk I glanced up and saw this hornet's nest right above us. 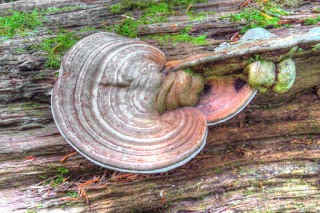 A fungus on a log during one of our walks 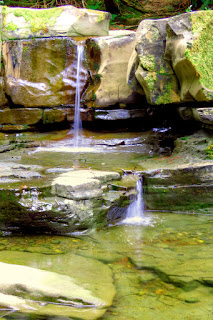 Three shots of a little waterfall 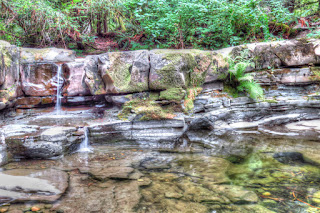 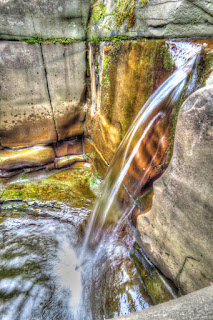 Posted by John and Aileen on the road at 4:27 PM