OFF TO PENTICTON IN THE MOTOR HOME 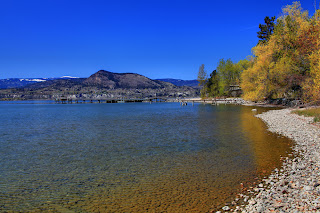 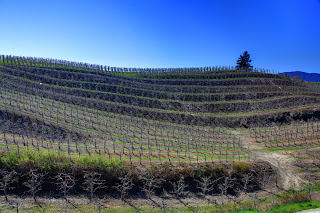 There are many vineyards in the Naramata area 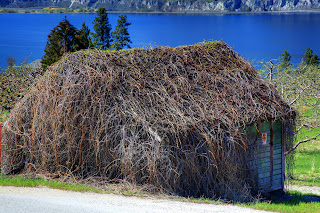 I found this vine covered shed to be interesting 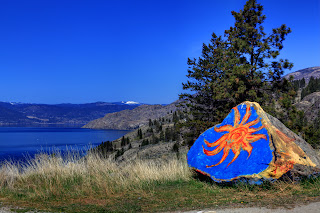 Some local artwork above Okanangan Lake 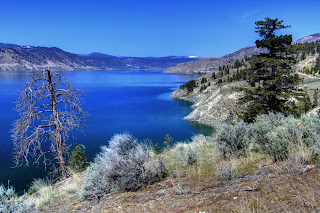 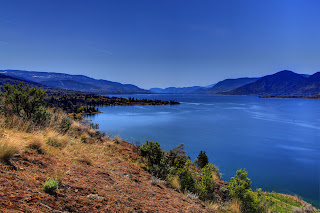 Naramata is on the point of land, Penticton is beyond at the far end of the lake 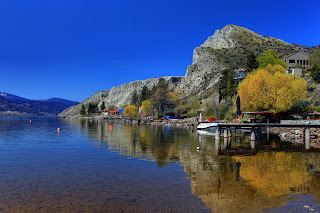 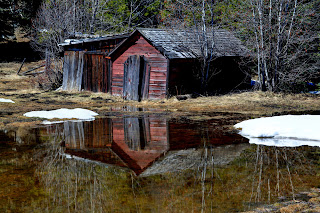 At the 4000 foot level of Chute Lake Spring is late 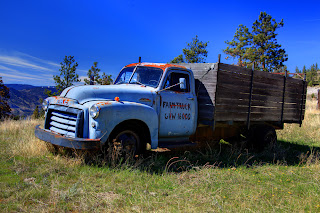 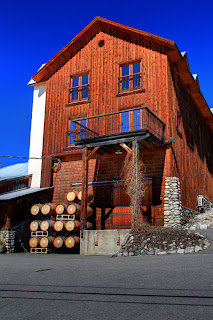 One of the many wineries in the area
We have been keeping busy with burning debris etc at Jacquie and Jim’s.   We seem to have to make a trip to town most days which eats up lots of time.  I’ve made use of Bev and Kev’s hot tub a couple times and that sure feels nice.
We went to Penticton as planned on Thursday.  We had to stop in Salmon Arm to dump the holding tanks first and pick up a few last minute grocery items.   We only made it as far as Vernon when we got hungry so stopped for an early lunch at the visitors welcome sign.  Since it was such a raw day, soup went down well.
We stopped at Sunview Windows in Summerland and had them measure up a replacement window for the bedroom.  We need a window that opens to provide cross ventilation.  I had removed the valance and trim so he was able to make accurate measurements.  The window will be ready in about three weeks.
We managed to find our way to Karen and George’s driveway in Penticton; we were last here in late September 2010 so it was still reasonably familiar.  They had removed some large Ponderosa Pines which had become infected by the pine beetle so the driveway was a little easier to back in this time.  I had to do some major pruning last time.  We weren’t even setup yet when our good friends Bev and Carole came over so they sat and watched the process.   They stayed for supper and shared a wonderful lentil stew our daughter Bev, had prepared.  Everyone agreed it was very good!
On Friday night, Aileen cooked stir fries.  Carole and Bev with Bev’s mother Pearl joined us.  Pearl is well into her 80’s and a real character.  I showed pictures from our trip south last year and she was very interested.  Rather than just putting the show on auto play, I showed it manually and we were able to visit and discuss our way through.  It was much more interesting that way.
On Saturday we had our photo council meeting.  We had a good turnout and some very good energy and ideas shared.  Of course, the potluck lunch was excellent, as always.   Later in the afternoon, Aileen began having severe back spasms.  These are not fun.  The only thing that seemed to help was heat.  We had planned on going out for supper with Bev and Carole but when we went to go in the restaurant chosen, found a large number of people waiting to be seated.  Not for us so we all went home.  Aileen went back to bed and I cooked myself bacon and eggs.  Aileen got up later for a bit of supper.
Bev had to go to a training session today as she is working at a couple of seniors polls tomorrow for the federal election.  Aileen decided she was okay on her own so Carole and I went off with our cameras for a few hours of photography.  We went to Naramata then up to Chute Lake where it was still snowy.   We had some fine weather and we both were shooting for HDR.   We were able to sit outside on folding chairs to have our lunch with a great view across Okanagan Lake to Summerland.
Aileen was sitting outside with Karen when I returned home which was a good sign.  She and Bev had decided supper was at the girls’ apartment so I worked on today’s images until time to go eat.  Carole and I played around with our images for a bit after supper.  Carole has the software to do HDR but hadn’t gotten around to it yet.
Tomorrow we intend to make our way back to White Lake.  The forecast doesn’t look very nice though as we are expected to have periods of rain beginning by noon.   I read April was third coldest in 75 years so hopefully May will improve.
Posted by John and Aileen on the road at 10:25 PM