When we went bed last night, the ground was getting white and big snowflakes filled the air.  I was awakened by wind and rain pelting the motor home about 2 am and when I looked outside, the ground was bare again.  We had planned to go to Campbell River to visit cousin Bill but he called to say the power was out and the weather was terrible.  We decided to postpone our trip.  Later I read online that Campbell River was the hardest hit with trees and debris down on many streets.  There was also a report that a house roof blew off and into the neighbour’s yard.  Maybe we’ll go tomorrow.
After breakfast we went down to the beach to check out the waves.  French Creek was the best, with big waves blasting the shore.  We went to several other areas but some of them were pretty sheltered so the waves weren’t much.  The tide was also going out as the morning progressed which minimized the wave effect at the beach.  After a while, we decided to head home as we were getting hungry even though it was still too early for lunch.  When we went in the motor home, Aileen noticed the time and remembered we hadn’t set the clock in the car to daylight saving time so it was actually past lunch time. 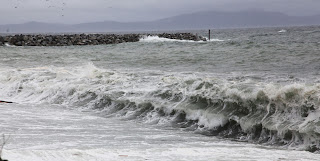 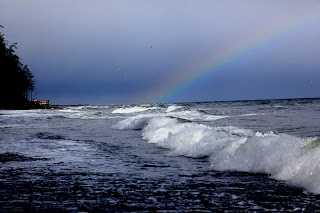 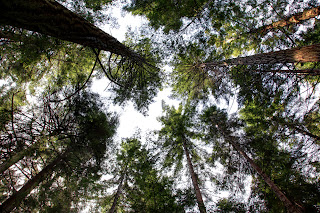 Rathtrevor has some dandy fir trees in the campground 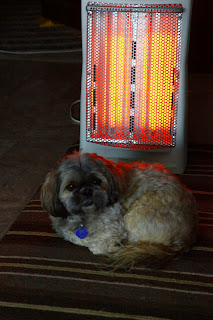 Mitzy had the right idea for today's weather

Posted by John and Aileen on the road at 2:02 PM