LEFT THE ISLAND, HEADED TO THE OKANAGAN AND SHUSWAP

Yes, our time on Vancouver Island has come to an end for another year.  The past few weeks have been very busy with lots of fun filled happenings.  We did have one traumatic and sad event when Mitzy was viciously attacked  by my nephews dog on Saturday.  He had been around her many times in the past couple of years but that day, he just dove at her from about ten feet away and before I could do anything, he had her head in his mouth and was chomping down.  We took her to the local vet who had just closed but a tech still there checked her over and referred us to a vet in Nanaimo that was open late.  They didn't stitch up the bite mark on top of her head and she has medicine and eye drops for her left eye.  We don't know if she will regain the sight in that eye.  Very discouraging!
We were up early this morning and on the road to the ferry where we had a long wait for the next boat.  We would rather get there with lots of time to spare so as to not have to wait for the next sailing.  We did have a sunny day for travelling which was great.  We had planned on going to forestry campsite on the other side of the Coast Range on Highway 3 but we were pooped out and stopped at a commercial campsite early instead.  It could have been nearly dark arriving at the forestry site and that is something we try to avoid.  We will just drive by it tomorrow on our way to Penticton.  The plan is to spend the weekend there then head up to Salmon Arm next Monday.  Bev had a new parking spot for us at her sister in law's that promises to be fairly quiet.  We will likely stay in the Shuswap for a week then depending what the weather forecast looks like, we will decide whether we go through the Rockies into Alberta. 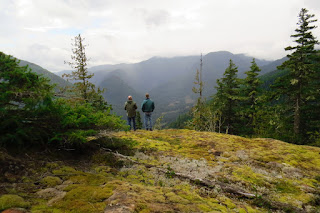 I went for a last ATV ride on the Island on Sunday.  It was a gorgeous sunny morning when we left home, but it didn't last long. 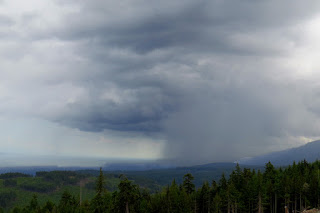 We only suffered from a couple of these storm cells, most went around us. 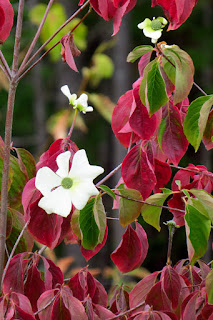 We were surprised to see several Dogwood trees blooming.  They normally bloom in April and May in this area.  It was neat seeing the fall coloured leaves with the blooms! 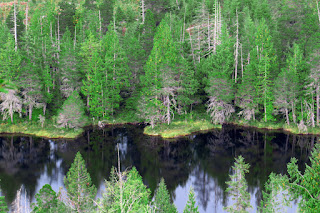 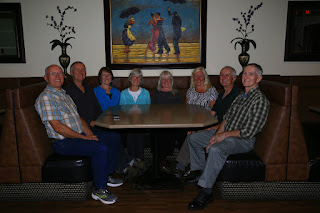 We had to get home in good time on Sunday as we had a family supper to attend.  That's me on the left with my seven siblings.  I'm the oldest and the other were born over a fifteen year span. 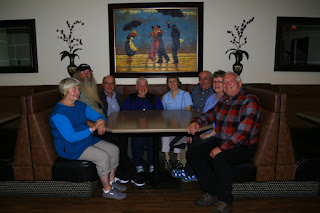 And these are our spouses 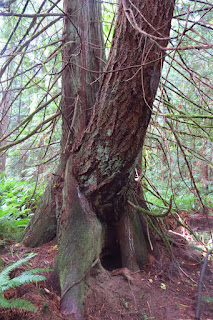 On Monday, we went to Duncan and met with Richard and Georgia for the afternoon.  We started off with a treat at DQ then drove to Saltair for a walk in Stocking Creek Park.  This Douglas Fir tree is being embraced by a Western Red Cedar tree. 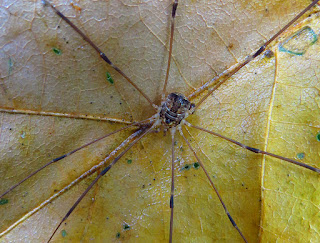 This long legged spider was perched on a maple leaf 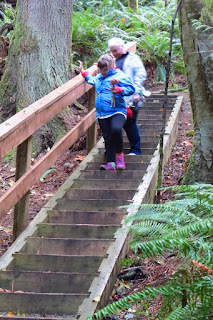 Georgia and Aileen on one of the stairs 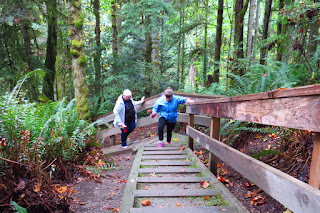 And going up another one 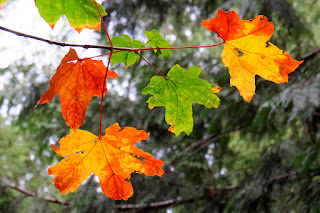 Some of the Broadleaf Maples were changing to their fall colours 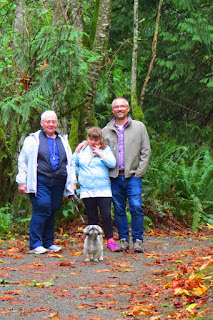 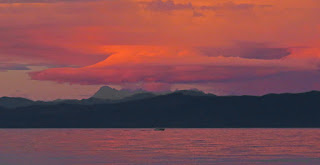 Tuesday evening we went out to supper with friend Bev D and her sister Dorothy.  Afterward, we caught our last Vancouver Island sunset for this year 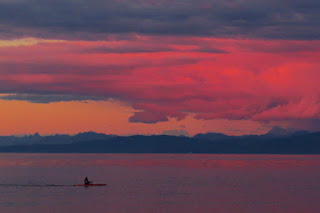 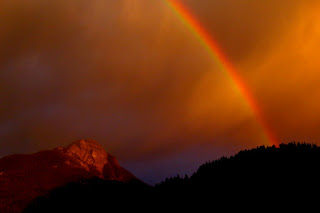 Tonight after a rest, I went for a stroll along the road in front of the RV park we are in and got to see some interesting and dramatic skies.  I was carrying my small camera so the images are grainier than if I had my main camera.

Posted by John and Aileen on the road at 9:13 PM