JUST ABOUT DONE HERE FOR THIS YEAR

Well that was a fast and furious week!  We camped with Aileen's sister Anne and her husband John at Miracle Beach Provincial Park from last Saturday until this Friday.  Five of the six days saw John and I out geocaching.  The other day, Sunday, was our drive down to Victoria to attend Aileen's and Anne's Cousin Pat's wife Irene's 90th birthday celebration.  We also went to a care home and visited a friend from Cluxewe who has recently relocated there from intensive care at the Victoria Hospital.  He'd had a stroke in his trailer at Cluxewe and nearly died.  He hasn't recovered enough that he can return home yet and he may not.
John and I visited close to 200 caches over the six days.  I logged 172 caches and John 160.  The different numbers reflect the fact that I had already done some that John didn't have and John had done  some that I hadn't found.  John borrowed a mountain bike from his daughter and I had mine so we did quite a few on bikes.  Most of the rest we walked to . I think we burned a lot of calories during the week. Aileen and Anne enjoyed having some quiet visiting time and did a little shopping and wandering as well.
We are getting down to the end of our Vancouver Island visit.  We are having a supper tomorrow night with, hopefully, all seven of my siblings and their spouses.  On Monday, we are getting together with Richard and Georgia one last time.  We are planning to catch the ferry Wednesday morning then drive to Penticton, arriving Friday.  Likely we will head for Salmon Arm on the following Monday to spend a few days.  Everything else after that is weather dependent.  I hope to head through the Rockies and into Southern Alberta before crossing the border in the second week of October.  We are going to visit our Grand Junction, Colorado friends again on our way south to Arizona.
I didn't take any photos worth looking at the whole week (I was on holiday from my camera) so I dug into my archives for a few for today.  These were all taken on slide film then scanned. 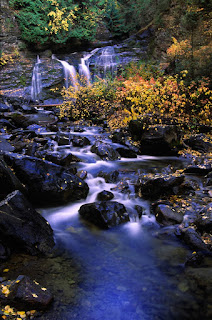 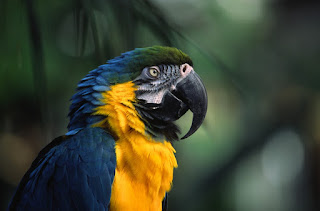 A parrot in a long closed facility in Victoria, BC 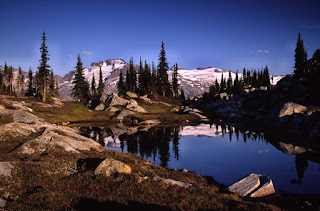 North of Revelstoke, BC back in the 90's, I think.  We backpacked in to this area then camped a couple of nights. 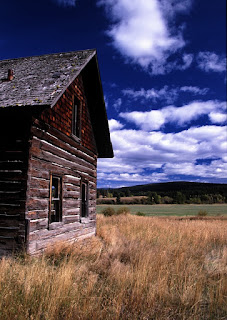 Out in the Douglas Lake Ranch area of south central BC 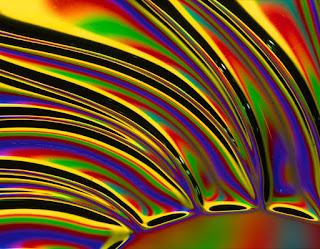 This is blacklight photography taken one night at camera club back in the 90's.  Blacklight shining on coloured strips of paper shot through a glass dish.

Posted by John and Aileen on the road at 1:20 PM