ROADTRIP (A VACATION FROM THE VACATION)

Life continues to spin out of control, it seems.  We were on the road in the car Wednesday morning by 7:45.  We arrived with lots of time to spare at the Comox ferry dock to catch the boat across to the BC mainland at Powell River.  The Sunshine Coast as the area is known is more like an island than is Vancouver Island since you can’t drive too far without taking another ferry.  Wherein lies the main problem when trying to go directly to somewhere to visit. When we got off the ferry in Powell River, we roared down to the next ferry crossing at Saltery Bay only to discover I had read the schedule wrong and the next sailing wasn’t for three hours!  We backtracked a little to a provincial park and had our packed lunch.  Later Aileen had a rest while Mitzy and I wandered along the shoreline.  In hindsight, it would have been much faster to take the ferry to Horseshoe Bay (Vancouver) then the ferry to Langdale but we really didn’t want to go that way.
It was about 5 pm when we finally arrived at our motel just south of Sechelt.  Aileen’s Auntie Ann was there in the parking lot to greet us.  She visited while we moved into the room and over supper in the restaurant.  Afterward, we followed her to her house and met her hubby Al.  After a leisurely breakfast on Thursday, we went back to Ann and Al’s to visit some more.  They took us down to their favourite walking path along the ocean where we visited some more until time for us to head homeward.  We zipped up to Earl’s Cove and caught the ferry to Saltery Bay.  Knowing that there was again a three hour wait to catch the ferry to Comox, we had a leisurely lunch at the same park then explored side roads all the way to Powell River.  We ended our visit by a walk in Willingdon Park run by the City of Powell River and it was very nice.  It was about 8 pm when we finally pulled in at the motor home.  Charlie’s renter, Michelle, looked after Sophie, our cat, while we were away.
I spent this morning getting Aileen’s computer checked over by a local “tech” and the car serviced.  I went off looking to visit Wendy and Randy at their new house in Bowser but just as I was about to turn off the freeway, I passed them headed back to their current dwelling.  I did find the house and it looks like it was a real find.  Aileen spent most of her day doing lots of laundry including floor mats, getting everything shipshape before we head up to the north island for June and July.
I cut all the lawns here after supper then we went for a drive poking about.  Aileen got a call from the doctor Wednesday evening and the lump on her nose was benign.  He originally thought there was a strong possibility that it was cancer.  It was around a hair follicle and very rare on the nose.  She was happy to hear that! 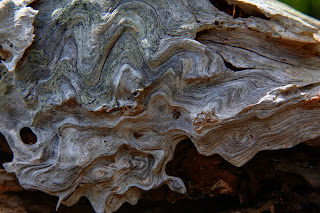 I thought the grain in this driftwood tree root was interesting 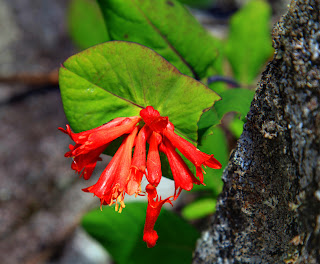 There were a few honeysuckles blooming along the beach walk 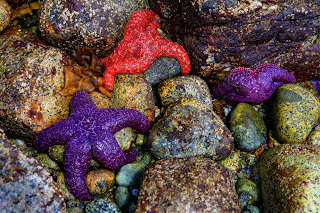 I was surprised to find lots of starfish.  they are becoming very rare on Vancouver Island.  I read that the re-introduced  sea otters are to blame for the decline 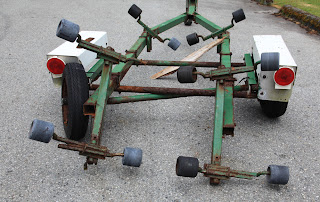 This boat trailer had been dunked in the ocean too many times.  The spring rusted through causing the axle to break away.  You can see a section of the spring on the left fender 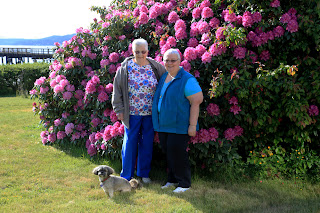 Auntie Ann who is 82, Aileen and Mitzy 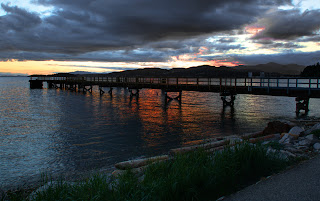 I had hoped for a sunset across from our motel but this was all I got.  We did have a great view though