Staying put for a few days 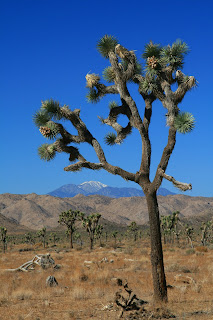 Joshua Tree with Mt Gorgonio in the background. It's 11,490 feet, highest in southern California. 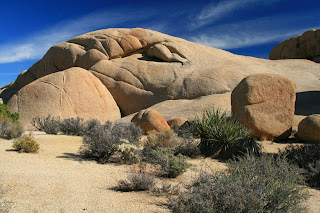 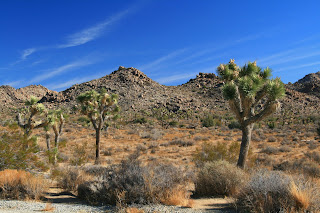 Typical scenery in Joshua Tree National Park.
Nov 10, 2008
After a lazy breakfast we packed up and hit the road somewhat after 9AM. We didn’t get far as we saw a Walmart in Apple Valley and we needed to pick up a few items. Apple Valley is the cleanest and prettiest town we’ve seen in California so far. Very progressive looking, not crowded and just gives off good vibes. Our lunch was at a roadside pullout which had a marker for Old Woman Springs. The landscape is very barren but they describe the ranch surrounding the springs as a winter grazing area. It takes a lot of acres to raise a cow around here. We are at 29 Palms Resort for a couple of nights and it seems pretty good. No freeway and no train so far! I went to a meeting this afternoon where they talked about upcoming activities and won second prize in the draw they had. I got a nice one quart water cooler. Aileen and I joined a group at a Chinese restaurant for supper. Ten couples turned out and we had a great time. They were a fun group. One couple was from Vernon. Over half of them are long time visitors to 29 Palms. One couple were full timers. Earlier I’d spoken to three groups from Kamloops and there are several others here from BC. I think we traveled about 135 miles today. We went for a nice swim before bed in the huge indoor pool which we had all to ourselves.

Nov 11,
Today was a sight seeing day. We took a drive around the Joshua Tree National Park. It was mostly sunny and quite warm when you were out of the wind. The park offers some interesting and intriguing rock formations and the Joshua trees are such a unique shape in themselves. We purchased a one year national park pass for $80. This is valid until Nov 30, 2009 and can be used for admission to any national park in the US except Hawaii. We hope to make lots of use of it. We packed our lunch and sat in the sun amidst some weird rock formations to eat it. One of the major uses of the park is for rock climbing. There were lots of people all over the rocks and many of them are camping in the park and spending days playing on the rocks. There are climbing routes for all levels of expertise. We drove up to Keys View Point and were rewarded with a pretty nice view. We could see the Salton Sea about 35 miles southeast and Palm Springs way to the west. Los Angeles smog intrudes this far much of the time which lessens the view, apparently. Aileen did our laundry this afternoon and was impressed with the machines. There were nice sunsets last night and tonight. I tried some shots tonight but couldn’t come up with a suitable foreground. I paid for another night here and it sounds like I’ll have to do it again tomorrow as Aileen wants to stay for the romantic walk on the golf course under the full moon after the park Bar B Q Wednesday night. It is nice to take a break from driving and hunting for a camp spot every night.

Posted by John and Aileen on the road at 6:46 PM