ANOTHER ROAD TRIP AND A COUPLE OF FIRSTS

We’ve had three major storms come through so far this winter dropping well over an inch of rain the first time, a little over an inch the second and about half an inch the last time.  The desert is very grateful and is greening up nicely in spots.
We took another road trip with Richard and Judy on Saturday.  Using my 2007 Arizona atlas led us to some interesting spots and situations.  While traveling along one section shown as gravel, we encountered big mud holes extending the full width of the road.  Fortunately we were able to back track a bit and take alternate farm roads.  We mostly got where we expected to until mid-afternoon.  The map showed this particular road paralleling the railroad for about 25 miles before intersecting the road we were going to take to make a circle route back to Gila Bend.  Less than halfway along this section, we ran out of road.  The GPS in Richard’s Jeep was showing the road then it suddenly ended.  There was a small road continuing, but it looked more suitable to ATVs so we turned back.  Very fortuitous, it turned out, as a few minutes later a Bobcat crossed in front of us.  I zipped down a wash out of sight of the cat and was in position when it popped up on the railway track.  He gave me a few seconds to shoots six shots then off he went.  That was the first Bobcat I have been able to get a shot of and only the second I have seen.  So, it was an exciting moment.
After that eleven hour road trip, yesterday was a rest up day.   Our friends Richard and Judy were so impressed with our Polaris General they have now bought one too.
Last Sunday we participated in a surprise 60th anniversary party for some neighbours.  It was interesting learning lots of facts about them over the course of so many years.  There was a video shown giving many highlights of their family, friends and activities.
We took our neighbor, Carol, for her follow up appointment up in Mesa one day and another day Aileen took our friend Marie shopping in Casa Grande.  So, as you can see, we don’t lack for things to do.  I posted several times on our park Face Book page and received a huge number of likes and comments.  It is gratifying to know that so many people are enjoying my photography.  It makes it worthwhile to spend so much time at the computer editing and organizing after enjoying my time in the field taking the photos. 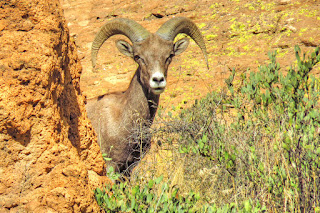 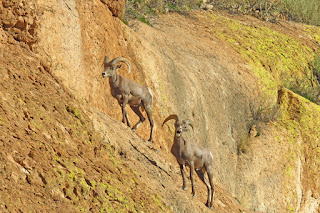 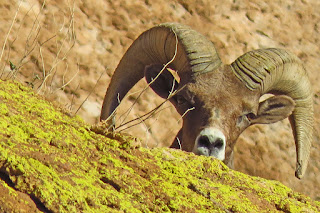 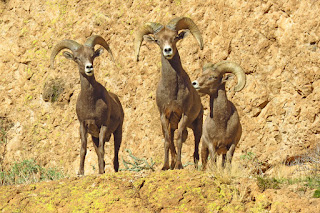 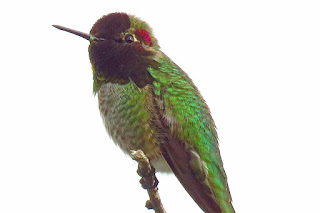 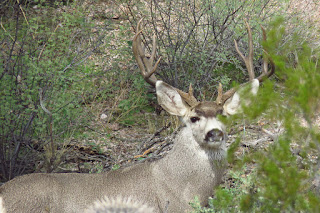 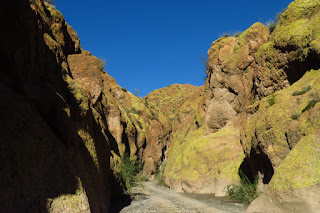 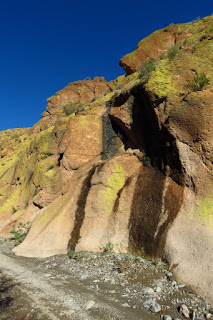 Can you see the reclining face top left? 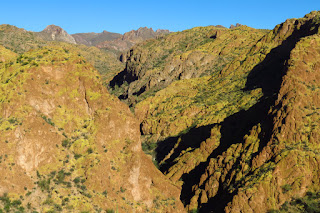 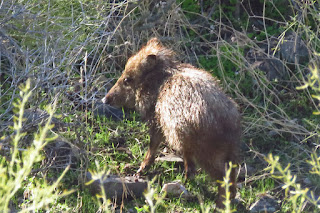 A young Javelina, there was a large group of them scattered around the hillside and it was tough catching one in an opening as they tend to scurry across the openings and then stop beside a shrub. 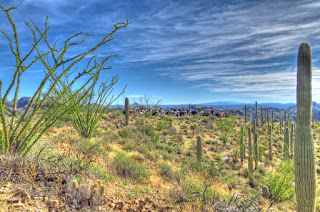 Sixteen ATVs on top of the Little Spine 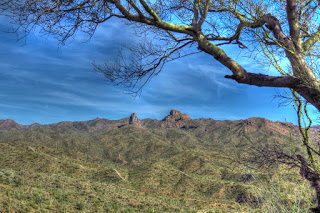 The Thumb from the Little Spine 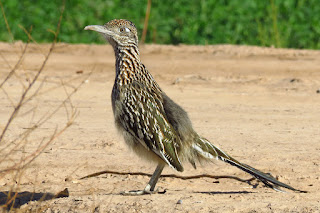 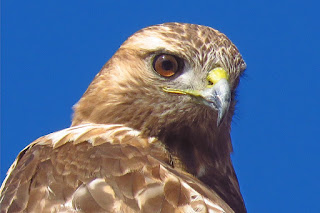 Red-tailed Hawk and below in flight 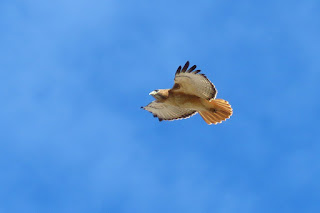 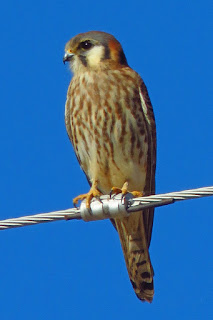 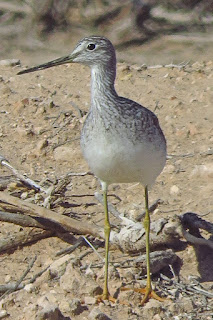 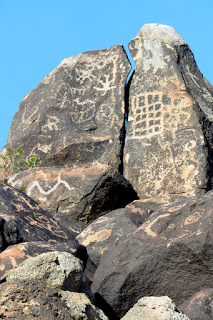 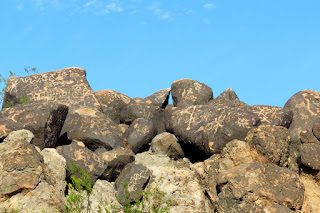 Painted Rock Petroglyphs.  There were no other rock piles close so I guess they just
kept adding new art. 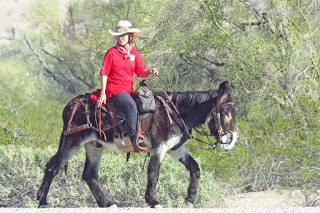 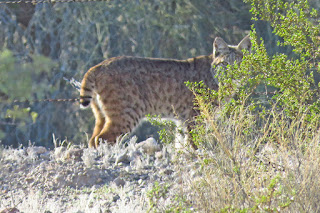 This Bobcat was one of my firsts.  Only the second that I have seen in the wild and the first I was able to photograph 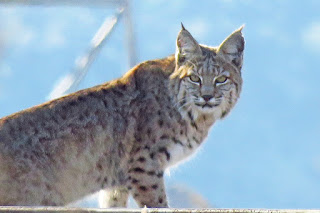 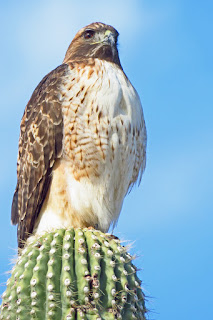 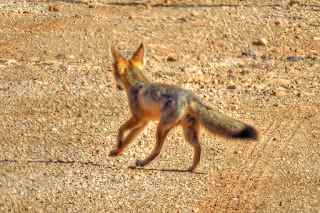 The second of my firsts was this fox on today's ride.  First time I have managed to capture a fox in AZ. 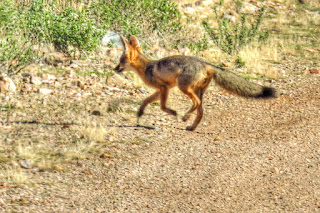 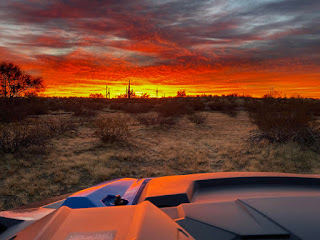 Sunrise on December 6.  I was planning on sleeping a bit late but Aileen, who was out walking, phoned to alert me to this starting to develop so I hopped out of bed, into the UTV and across the highway to a vantage point.  It didn't disappoint!  These last five images are from the iPhone.  This one is using the steering wheel as a rest and capturing the reflection in the hood. 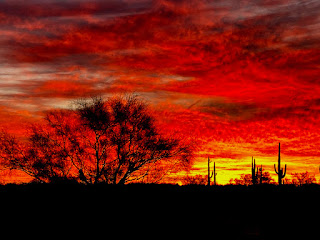 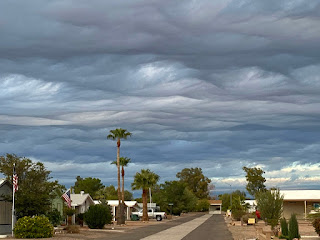 We witnessed this neat sky on one of our evening walks 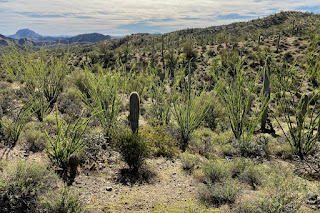 The Ocotillo are leafing out.  Ocotillo leaf and wither at the whims of the weather.  If there is enough moisture, they will leaf out quickly after a storm.  If the moisture isn't sufficient, they will die down rather than waste their energy blooming.  They can leaf several times a year or stay dormant for long periods. 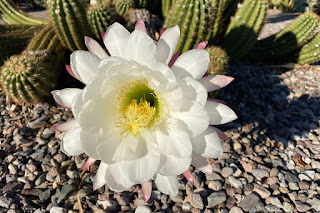 Spotted this cactus blooming in Florence Gardens on our way around yard sales the other day.

Posted by John and Aileen on the road at 7:44 PM