FIRE IN THE SKY 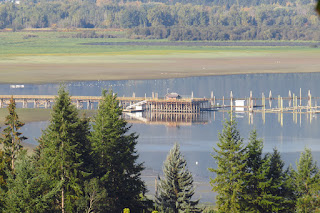 On our walk this morning, I had this glimpse of the local wharf.  See those white birds on the left?  I thought they were swans but on closer inspection, they were pelicans. 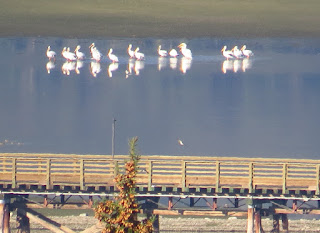 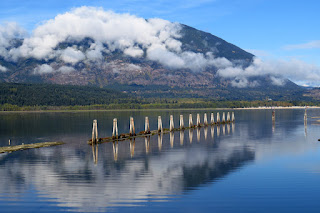 When we returned from our walk well over an hour later, I drove down to the wharf hoping the pelicans were still there but they were long gone.  I had to content myself with this image. 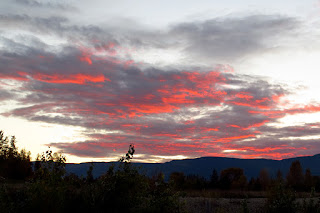 Fire in the sky.  When I was heading out to try for the lunar eclipse this evening, I spotted this scene. 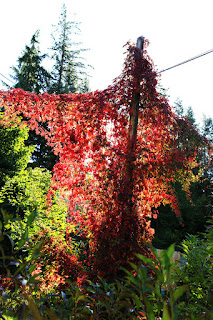 A good way to hide a large power pole.  Known locally as The Man on 10th Ave 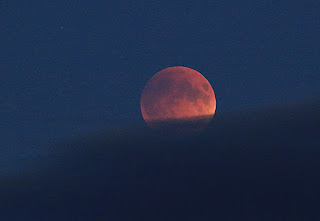 We had to wait quite a while for the super moon to emerge from the clouds and then it stayed hazy making for difficult photography. 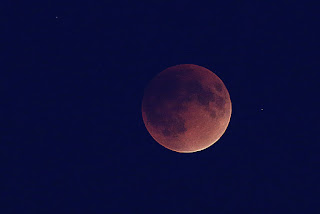 Bev and Kevin tried to get us into their back yard but we proved to be just too darn big.  When they remove more of the high bank and lessen the incline I have to back the motor home up, we will give it another try.  Removing the high bank is part of Kevin's long term plan for his back yard.  We have moved in to an RV park for our last five nights here.  We plan to leave Thursday morning heading for the West Kootenay.  We are still on target for crossing the border on October 8 or 9 on our way to Grand Junction,CO.
We've visited some of our friends and family in this area, Aileen more than me.  I intend to go to camera club tomorrow evening where I will see more friends although I know a lot less of the members than I used to when I was the longest attending member of the club.  Jacquie and Jim offered us pears so we picked a box full and Aileen canned a bunch over the weekend.  Eleanor and Ron offered us green beans and we've scored two batches of those.  The first was a bag Ron had picked and last night I went over and picked a two gallon pail full.
Aileen house sat for Bev and Kevin over the weekend as they went to Whistler with a group of friends to participate in Muderella which was a 9 km course on the ski area with a series of obstacles to overcome.  It sounds like they had a good time but have lots of sore muscles and joints.  The final item was zooming down a slide in to very cold water.

Posted by John and Aileen on the road at 9:42 PM