After wrapping up our list in Salmon Arm, it was time to head over to Vancouver Island.  After some lost communication,I was able to meet up with my friend Doug Tuesday evening.  I had emailed him and he phoned and left a message on our cell phone last Saturday at 12:39.  I checked the phone several times over the weekend and there was no message or record of a call.  Then about 10 pm Monday night the phone made a funny little beep and when I checked it, there was a voice mail from Doug.  The call also came up on call display saying Saturday 12:39.  How can that happen?
We had the motor home serviced on Tuesday so we stayed overnight in the Piccadilly Mall parking lot so we could make an early start Wednesday morning.  We were up early and on the highway heading west by 5:50 am.  We stopped at a rest area at Chase to have our breakfast.  While there were a few snowflakes floating around on the upper levels of the Coquilhalla Highway, the roads were bare and wet in only a few spots.  Of course it was enough to get the car and motor home both filthy. We pushed it fairly hard and arrived at the Tsawwassen ferry terminal at 12:14 in time to catch the 12:45 sailing to Nanaimo.
We're now set up at my brother Charlie's in Errington.  We've been busy catching up with things here.  The weather has been cool still and in fact we had some frost this morning.  The forecast is promising warmer weather is coming.  Aileen is arranging for us to visit with some of our family over the next while.  It seems the older we get, the busier we and everyone else are making it harder to get together. 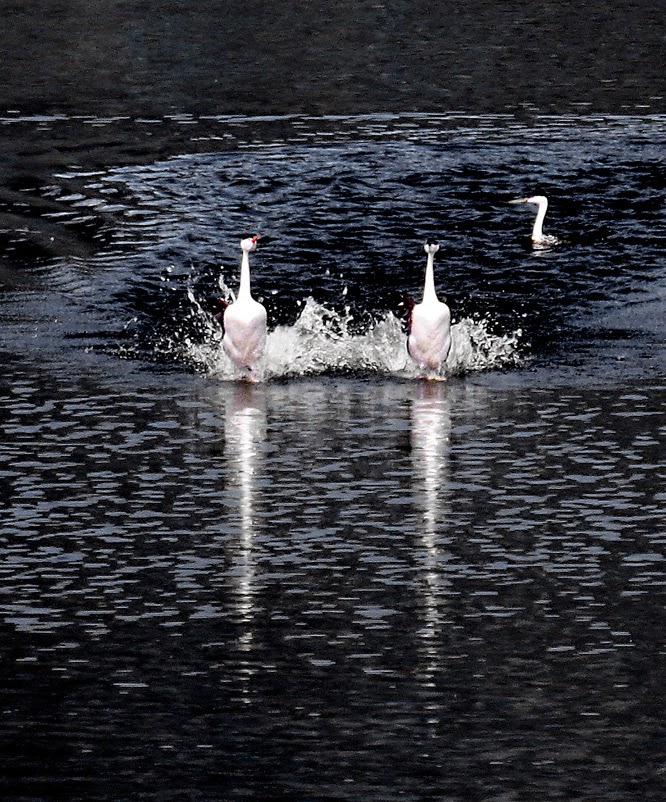 I was fortunate to capture these Western Grebes performing their mating dance before I left Salmon Arm.  In another few days they will be doing this more but I've never managed to be there at the right time with the right camera before. 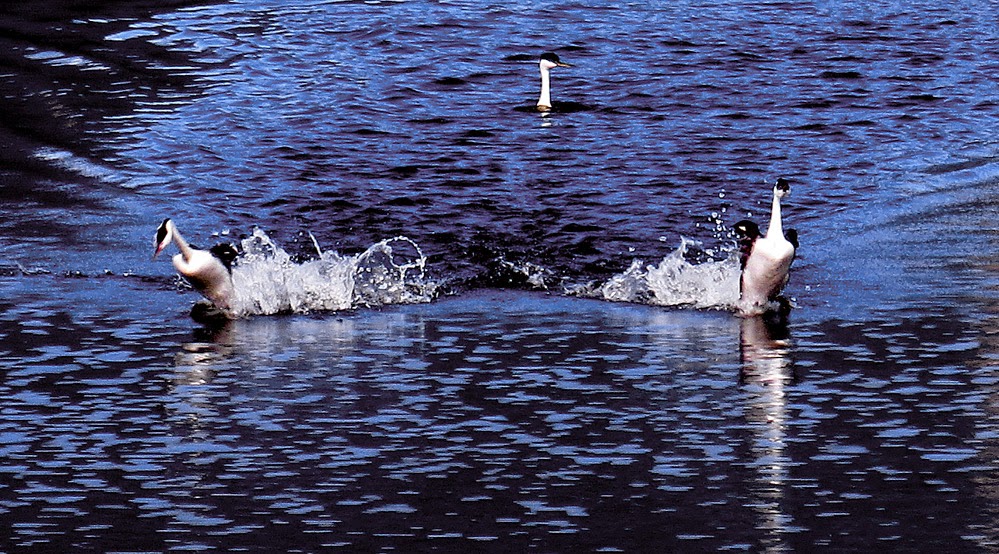 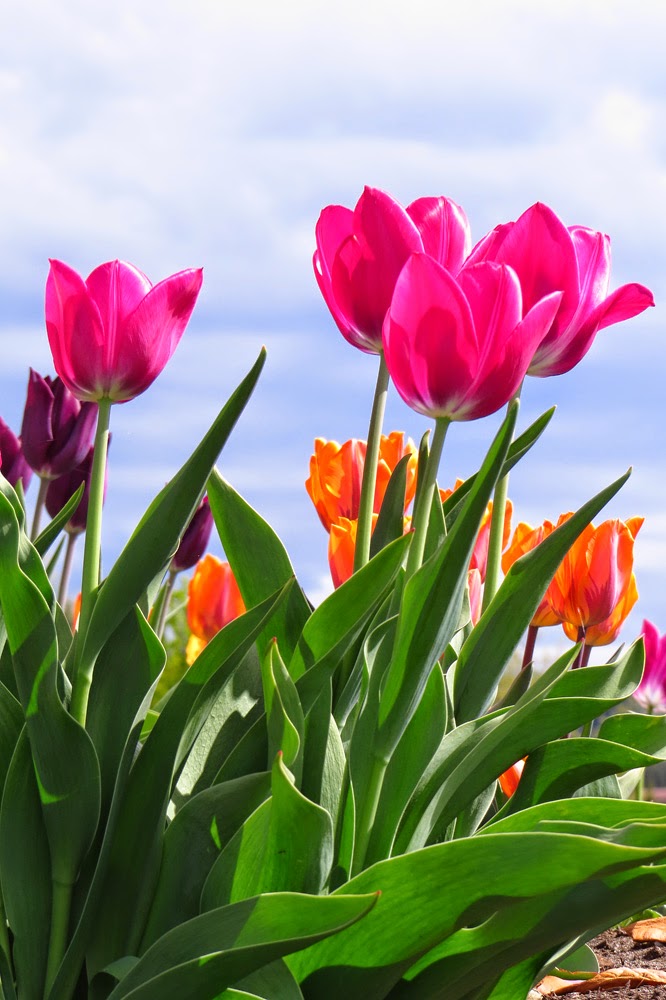 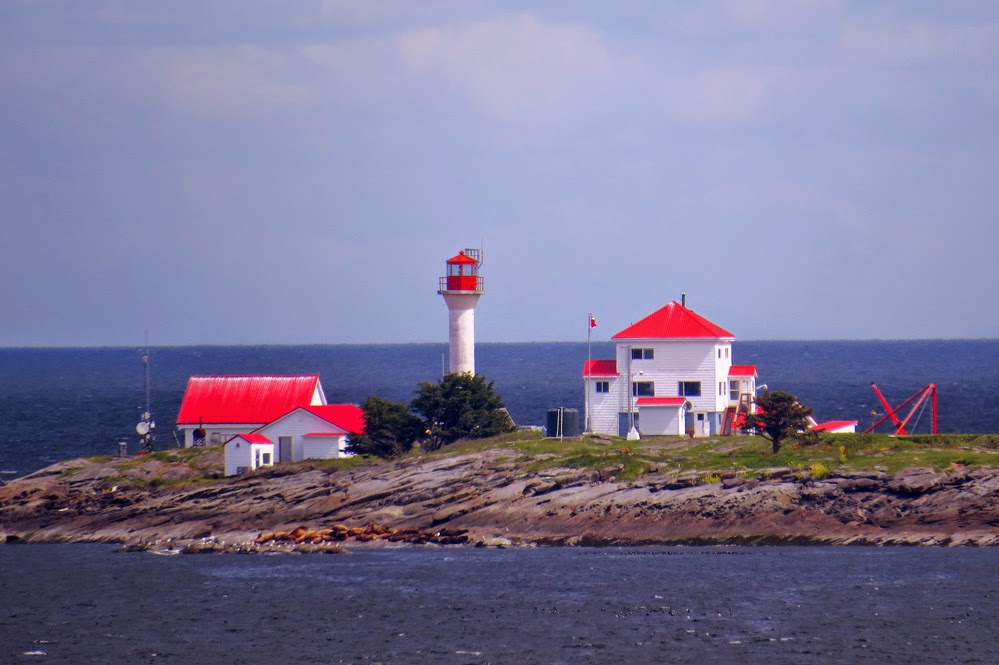 The ferry passes this little island on the way into Duke Point, Nanaimo 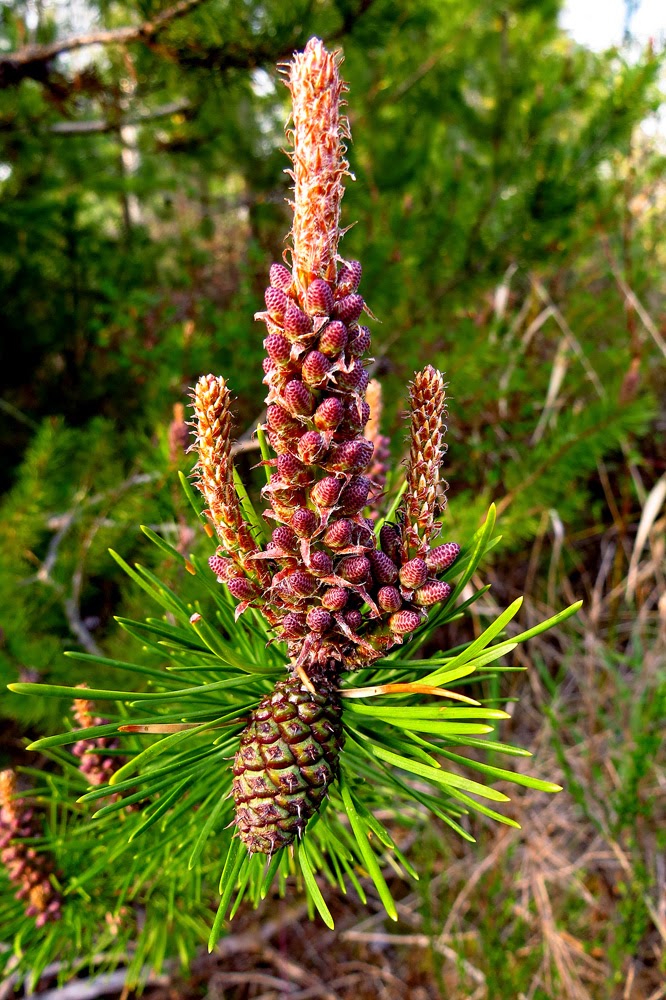 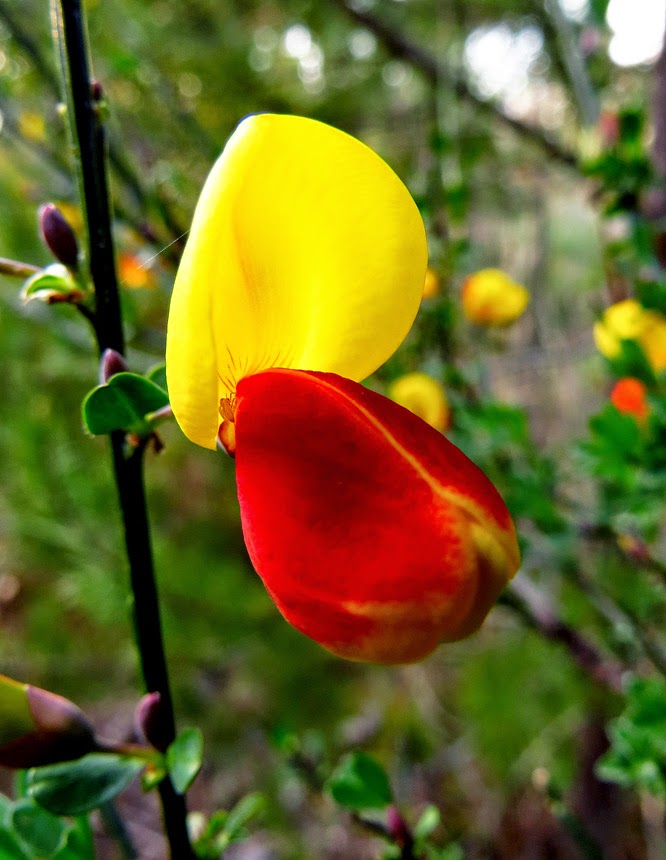 The Broom is flowering 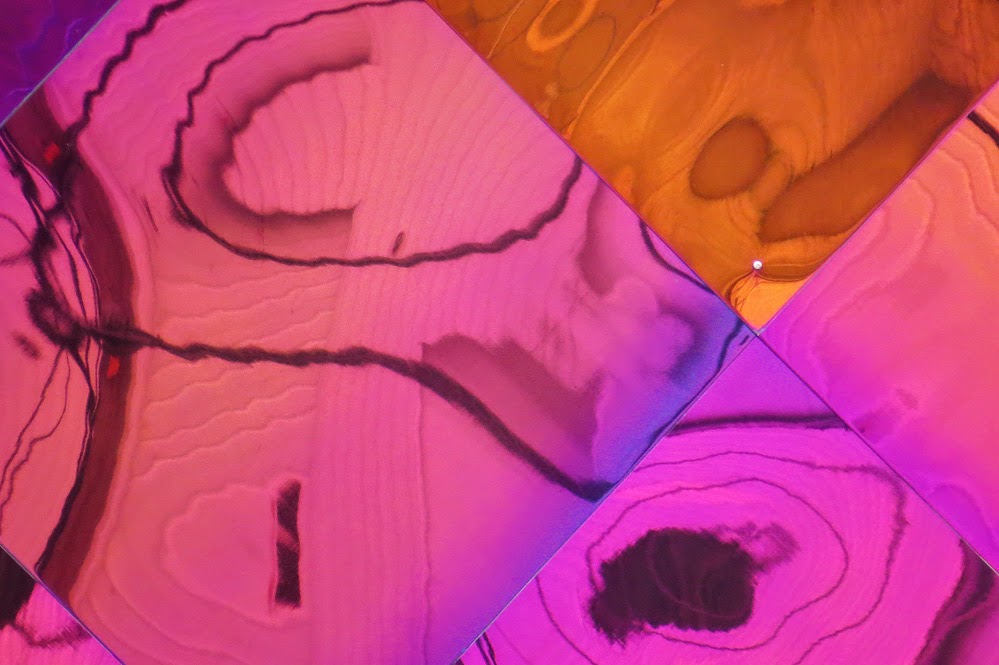 Reflections on a mylar like feature wall on a business

Shaw is one of the major phone, internet and television providers in Western Canada 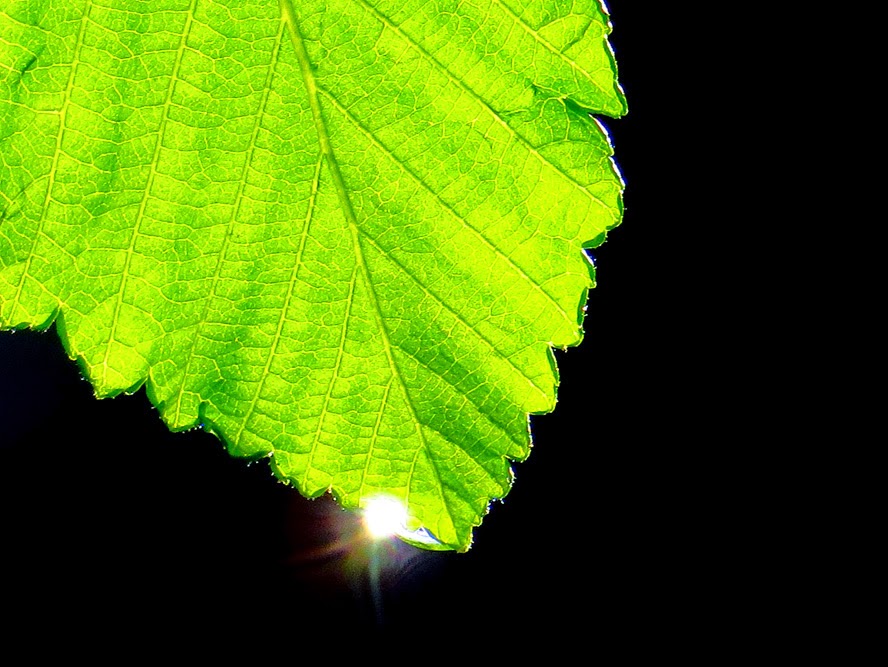 Aileen and I and friend Bev D visited Milner Gardens at Qualicum Beach yesterday.  There was a drop of dew hanging on this leaf and it picked up the sun's ray.  This was shot with my Canon SX50 with the lens racked all the way out to 1200 mm equivalent and then the digital zoom at 195 X. 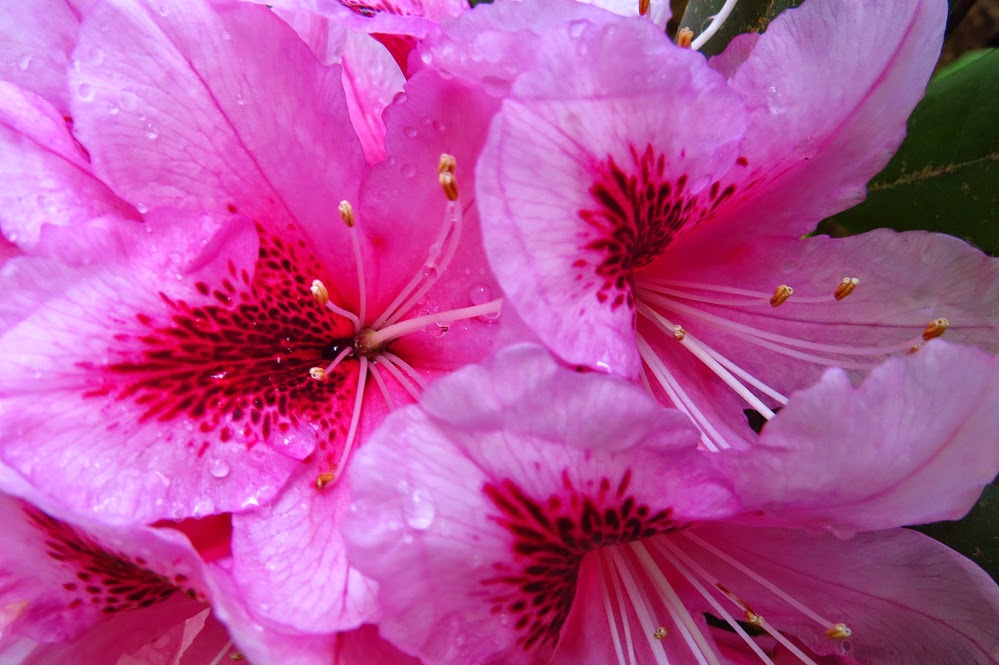 The rhododendrons were lovely 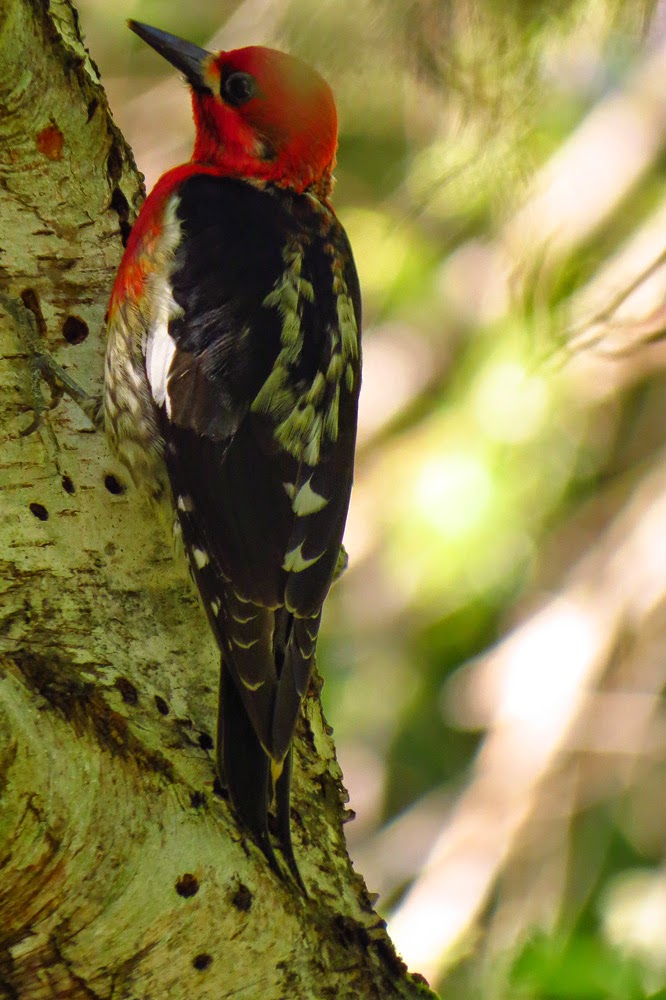 We saw several Red Breasted Sapsuckers while at the Gardens 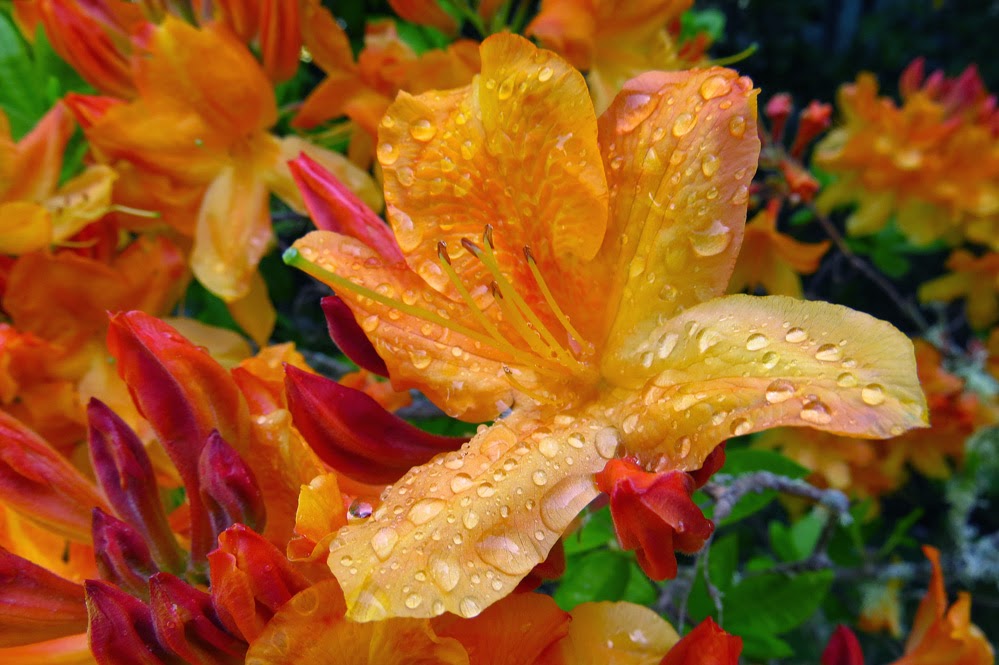 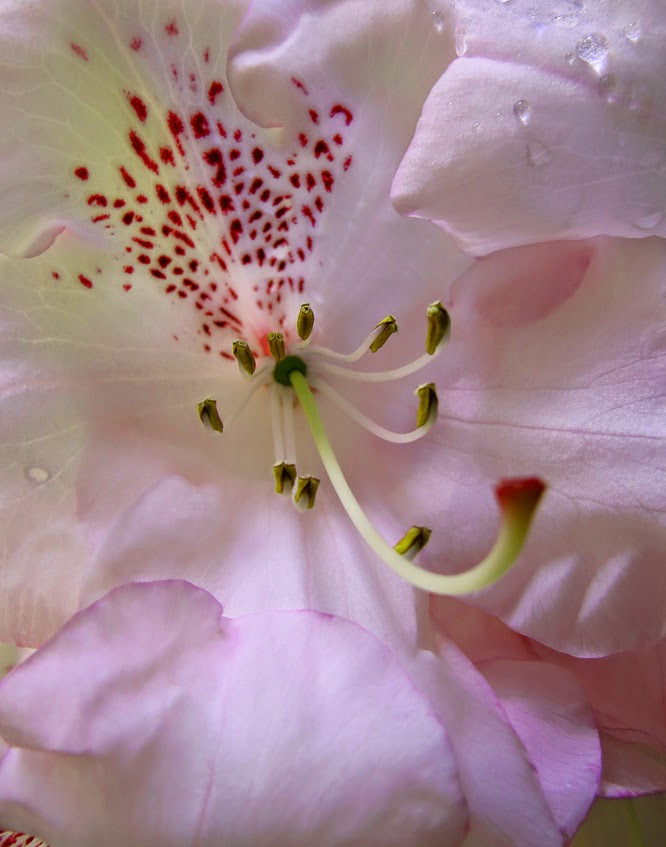 Posted by John and Aileen on the road at 7:26 AM