ANOTHER WEEK IN PARADISE HAS GONE BY

Well that was the warmest November we’ve had since we’ve been coming south.  It was 10C (50F) this morning which is the coolest for some time.  We’ve had a few days of slightly cooler weather with highs only in the high 70sF but next week is forecast to return to the low 80s.  We had a fairly good run at one of the pools as it was cool enough for Aileen to swim every night.  However, that has ended.  I guess someone whined that 85 or 86F was too cool for a lap pool.  Some of these people think the pool should be within 5 degrees of the hot tub!
Jacquie and Jim arrived on their lot Monday.  We’d just put a large ham in the roaster so invited them for supper.  We played Mexican Train with them Thursday evening which Aileen won handily then we introduced them to the newest game we’ve taken up called Sets.  Friends from Vancouver Island who used to live here but now have a house in Arizona City, Glen and Irela, dropped in to visit Wednesday afternoon so we caught each other up on what’s happened since last winter.
I was out for my two ATV rides this week.  I led the Tuesday group and there were just four of us.  Great size group and they were interested in my geocaching so I found three caches and looked for another that I suspect washed away in the monsoons over the summer.
Aileen has gone to a workshop in Casa Grande for the day and I hope to remember a happy hour get together this afternoon celebrating one of the neighbours selling her business so she can spend the whole winter here from now on.  She’s had to keep returning to Washington State periodically to ensure things were running smoothly.
Last Sunday, I went off geocaching again on the Florence Kelvin Rd.  I got a pretty late start and had a good day except for the brutal climb back up the big hill.  I would ride until my legs turned to jelly then rest for a bit then walk to get the circulation going before riding some more.  I put on about 28 kms according to the GPS plus all the short walks from the road to the cache where I normally left the GPS on the bike seat.  I met a geocaching couple from Florida and we chatted a couple times.  They were pretty amazed at my using the bike.  They have everything pretty automated, downloading to both GPS’ and uploading from the GPS to the computer at the end of the day.  I enjoy the peace and serenity being all by myself on the bike in these more remote areas.  I went for long periods without seeing anyone today.  It was 5:04 by the time I loaded my bike and started the car.  It took about forty minutes to get.  I found seventy caches and three of them were more interesting than the F2K series.  Interestingly, the Florida couple didn’t find two of the three.  One was too steep looking but there was an easy way up and the other they looked for but didn’t find in the rocks.  It was well hidden but I found it after a bit.
Last Monday I went to Coolidge and renewed my licence and off road decal on the ATV plus several other errands then Wednesday I took the car for an oil change and tire rotation plus a few other things over in San Tan Valley.  One thing about where we spend our winter is the large distances we drive to get to some of the services.  However, we certainly don’t want to spend our time living any closer to them either.  We are finding it much noisier living in the motor home this year as three of the closest neighbours have very loud and raucous happy hours and the occasional longer party.  We were more isolated from them when we were in the park model. 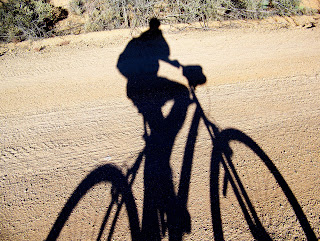 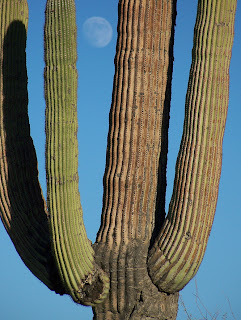 Moon through a saguaro 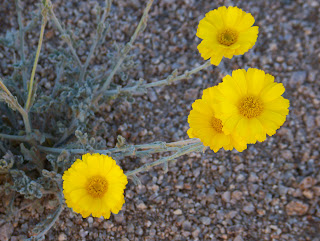 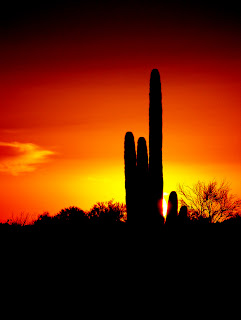 I drove home from geocaching into this nice sunset, just had to stop for a few shots even though I was getting late 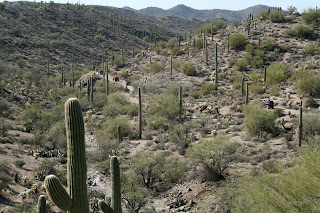 On the Thursday ride 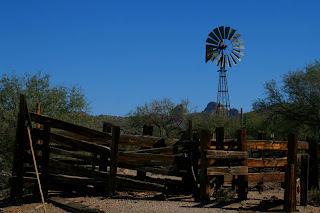 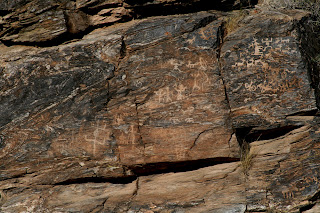 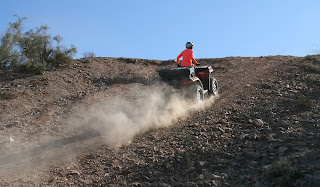 Linda making the climb out of Cottonwood Wash 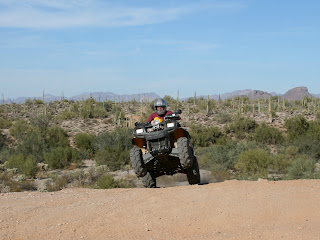