WEATHER CHANGE ABOUT TO HAPPEN FOR US?

We’ve been hitting 90F or more just about every day since we arrived here. The other day we were only 4F off the all time record for that day.  Today a few clouds moved in and we even had a few spits of rain.  The high today was to be in the 80’s, tomorrow in the 70’s then the weekend is to be only in the mid 60’s.  We are supposed to get back into the low 70’s next week so I think our heat wave is probably over.  We sure could use a good rain though as it is very dry and dusty where we ride.
I led the ATV ride on Tuesday this week but was just one of the huge pack today.  We had 25 machines out with 27 people.  That makes a pretty long line when you stretch out to let the dust settle.  On Tuesday, 83 year old Blue had his engine seize up while riding at nearly 40 mph on a paved road.  There was quite a cloud of smoke that came from his tires skidding on the pavement.  Two of us took turns towing him home.  When we got home and he tried his starter, the engine turned over.  He said today it runs fine again now.  I wonder if his fan quit working causing the engine to overheat and seize?
After some research and checking around, I bought a Rand McNally RV GPS the other day.  Aileen had been suggesting that we get one for quite some time.  This one is supposed to warn you away from roads not suitable for your particular RV and also make route choices based on the RV info you enter.  It also has a car mode for normal use.  We hope to try it out tomorrow as we are planning a run up to Gilbert to a Sprouts store and also a gluten free store nearby.
My birthday came and went with less fanfare than last year.  Our friends Ken and Marie came to help celebrate the occasion and delicious supper Aileen made including a really tasty gluten free cake.  We played a couple game of SkipBo later both of which the guys won somehow.
Our neighbours next door arrived last night.  They had a beautiful 2010 Buick Enclave but arrived in a different car.  When I inquired about that, he told me how somewhere in Kansas the other day, the motor blew.  It only had 25,000 miles on it and he’d had it serviced just before leaving Minnesota.   Lots of people arriving in the park these days. 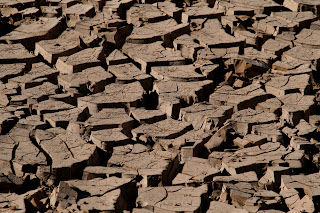 Did I find the mother lode of light chocolate?  No, just some dried mud along the Gila River 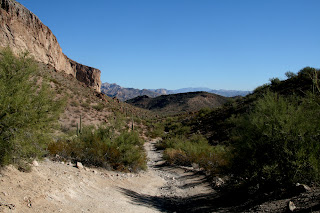 Our ATV road past South Butte on Tuesday 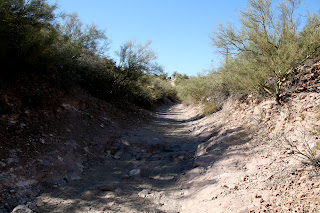 Looking back to where I took the previous picture 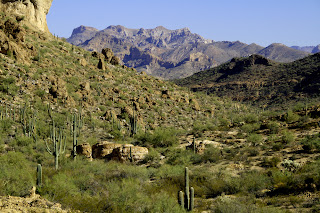 Further down the road looking east 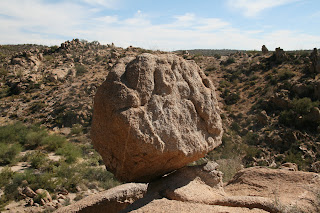 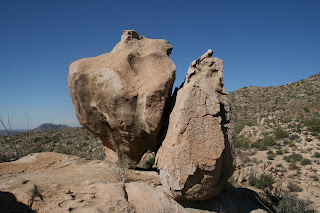 Lots of interesting rocks in this area 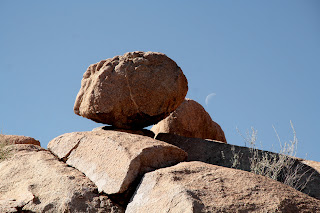 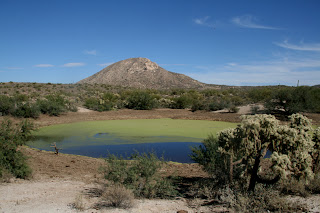 A man made water tank with Grayback Mtn in the background.  Where we had lunch today was just at the bottom right of Grayback.