Our beautiful sunny weather is still holding which is nice except for the extreme fire danger.   I did some geocaching several days this week.   Last Sunday, Mitzy and I found some nice trails to cache on while Aileen was at church.  On Monday, I went out with my sister Janet and her husband, John.  We had a good day finding a dozen.  I only got to claim eight as I had already found four of them on my own.  On Tuesday, I took Mitzy with me and we wandered some trails in the bush behind the farm I lived on in my teens picking up a couple caches.  The Broadleaf Maples were shedding their leaves creating a beautiful, glowing forest floor.  On Wednesday, we went to Cumberland to visit our longtime friends, Lynda and Perry.  We found a couple caches along the way.
There was no geocaching today as we went to Victoria for Aileen’s last acupuncture treatment.  I dropped her at her appointment, walked Mitzy along the waterfront for a few minutes then picked up our friend Bev.  By the time we got back to pick up Aileen, she was waiting for us.  We drove up near Duncan where we had a leisurely lunch at the Pioneer House Restaurant.   We then stopped at a farm market just up the road for Bev to stock up on produce to take to her mother’s where she will be for the next week and a half.
On Monday evening, I took Chas’ place bowling as he had a crash while playing volleyball last Thursday and was too sore.  Sheila had gone to Vancouver Thursday to help her son who had nose surgery the next day.  Since she wasn’t home yet, Aileen went to Toastmasters in her place.  Aileen has been enjoying Toastmasters and plans to join the group in Florence, AZ.  She also went to a Toastmasters event in Qualicum on Tuesday. 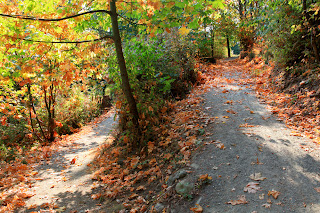 Upper trail, lower trail, they're both beautiful!  Where Mitzy and I were geocaching Sunday. 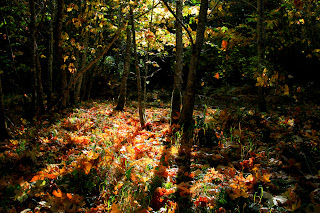 These two shots were taken on our Tuesday outing 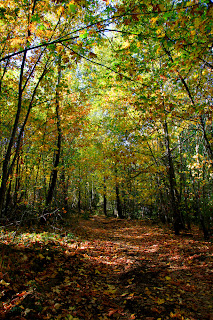 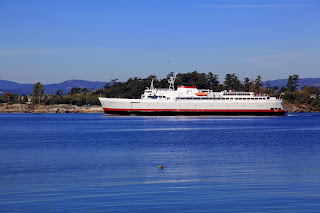 This is the MV Coho, the ferry we will take from Victoria to Port Angeles on October 14. 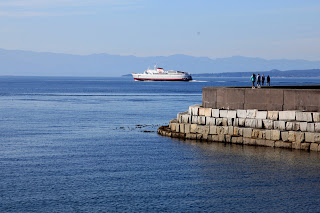 Here it is heading across the Strait of Juan de Fuca.  That's the Olympic Peninsula in Washington
State in the background.

Posted by John and Aileen on the road at 9:03 PM