FIRST ATV RIDE OF THE SEASON

After lunch yesterday, Aileen slept most of the afternoon away as she was still recovering from our busy trip to the Sunshine Coast.   I took the ATV up Nile Creek for a ride.  I put on 48 kms and ran into snow twice.  I did see an owl on the way back and he let me get some pictures.   I had an interesting ride with even a challenging creek crossing.  It was mostly tee shirt riding too, which was a bonus.  The flies were pesky up high when I stopped for pictures out across the islands.  I had cut the front lawns in the morning.   Brother Charlie and Sheila arrived home late last night so that’s it for my lawn cutting for now.
We went to Duncan this morning for Aileen to go to church.  Mitzy and I drove around the Glenora district and found a section of the Cowichan Valley Trail where we went for a about a 3.5 kms stroll.  We met several big dogs and Mitzy is very nervous with them since her second attack in two months.  We came straight home after lunch.
I filled out our passport renewals online then printed the forms which we’ll take to the passport office in Nanaimo tomorrow. 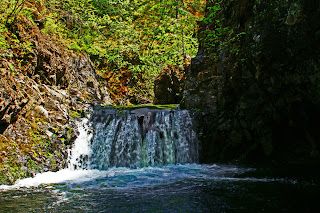 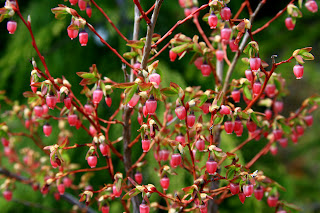 These are wild huckleberries in bloom 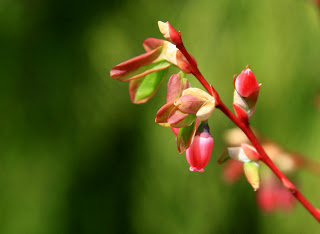 Looking across the Salish Sea.  Deep Bay on Vancouver Island is in the lower left.  Next is Denman Island with the Chrome Island lighthouse off the right end. Hornby Island is next then Texada with the huge rock quarry highly visible. Directly beyond the quarry would be Powell River on the Sunshine Coast.  Sechelt, where we visited Auntie Ann is way off to the right. 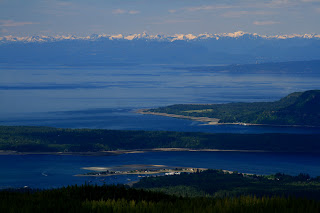 A closer look at Deep Bay boat harbour, Denman, Hornby and Texada Islands and on to the Sunshine Coast (which is mainland BC) 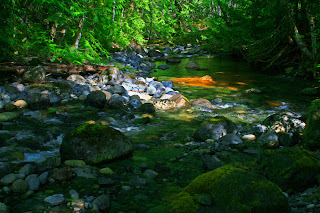 Looking down the creek 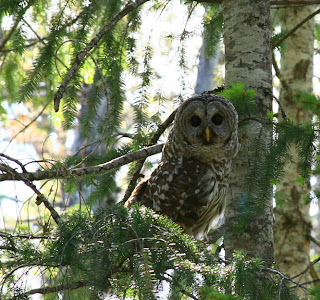 Posted by John and Aileen on the road at 9:32 PM