WE GET ANOTHER SHOT OF WINTER!

We awoke to 3 inches of wet snow Sunday morning (yesterday) and some of us weren’t too impressed.   Mitzy, being an eight year old, thought it was great of course.   Aileen wanted to go down to the church in Duncan she sometimes attends so off we went.  I had checked the highway cameras and they all indicated no snow.  Sure enough, the snow ended just a few miles down the road.  The sun came out and it turned into a fairly decent day.
After dropping Aileen at the church, Mitzy and I went up to the area where I spent my younger years.  We walked by my parent’s old farm which is now Duncan Meadow’s Golf Course.  It is a very quiet road so Mitzy can be off leash.  Later we walked down Drinkwater Rd where she really needed her leash as it is a short cut to the local landfill and there was a steady stream of traffic, being Sunday.   I enjoyed seeing that the skunk cabbage patches from my youth were still doing well.  They are such a cheerful welcome to Spring.   When I got back to the car, I was accosted by one of the locals who wanted to know if I was dumping garbage.   I assured her I wasn’t and go ahead and call the police!  Geez, some people over react, I’d been parked there an hour.
We went to Just Jakes, a café in the old part of Duncan and they have a good sized gluten free menu but some of the staff are a bit lacking in training as to what gluten free means.  However, we did get a good lunch and Aileen didn’t have any reaction so that was good.  Aileen managed to get her hair cut at a walk-in in the mall in Nanaimo on the way home.  She was way past due for one.  She cuts mine and one day I will have a go at doing hers.  We just have to be far enough away from anyone who knows us!
We were invited to Sheila’s Mom’s for supper last night celebrating Sheila’s birthday (Saturday) and Charlie’s (yesterday).  There was a good crowd and lots of good food.  Sheila’s sister in law, Roong, cooked up three plates of yummy Chinese food at her restaurant and sent it along plus there was pizza and chilli plus loads of dessert.
On Saturday, I helped my niece Merrilee and her family move from Comox down to Qualicum Beach.  Her husband had rented a large van and he’d spent several days previously packing everything in boxes and totes which really simplified the loading process.  I looked after the packing into the van and we managed to really get a load on the truck.  We thought we’d need to do two trips but we got it just about finished with the one trip  My sister Janet had her car and her husband John had his little truck so with both those loaded there wasn’t much left.  Derek will be able to take a little bit each time he goes up to clean and paint prior to selling the condo. 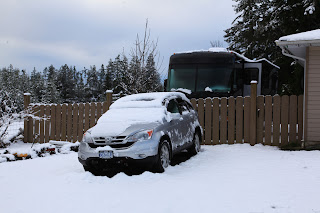 Our welcome to April on Sunday morning 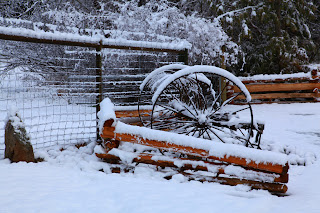 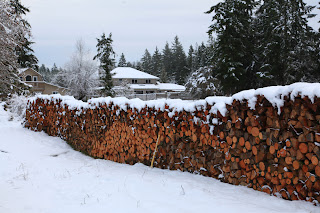 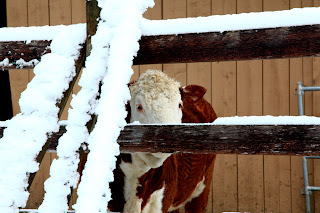 The cow is wondering where the green grass got to 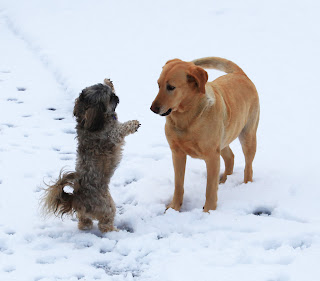 Mitzy says "It was this big!" and Belle says "Wow!" 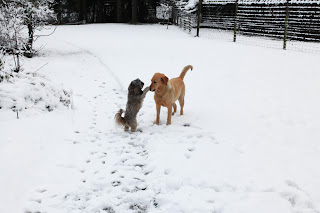 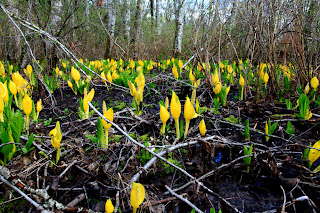 A patch of Skunk Cabbage 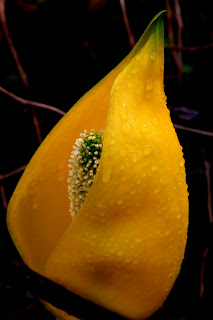 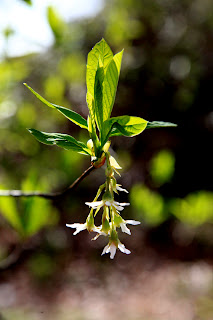 The weather has not been very good this whole Spring.  We’ve had lots of wind and rain and today we are getting both, again.  Of course it didn’t help when my friend, Maureen from the Florence, AZ ATV club, sent me pictures this morning showing the cactus blooming and mentioning that it is so warm when they’re out riding they have to seek out shade every time they stop as it is too hot to stay still in the sun.   We are planning to still be there at this time next year.
Posted by John and Aileen on the road at 1:49 PM