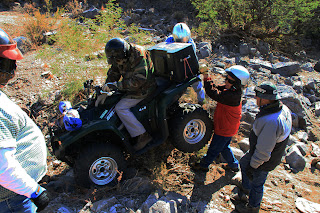 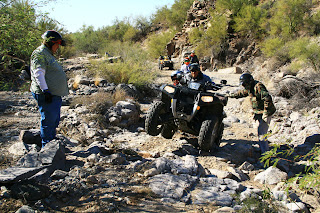 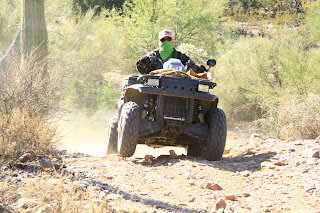 Lynn assured me he was smiling 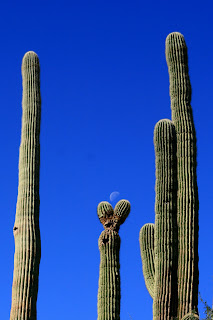 Moon in the Saguaros 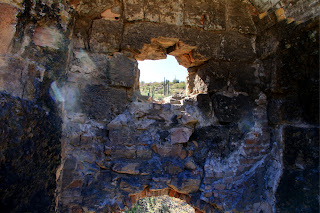 Some old mining ruins, this is the chimney/oven for smelting 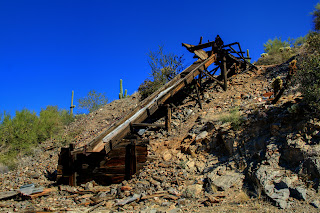 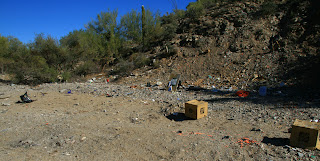 This an all too common scene out in the back country.  These idiots take all manner of items like old TVs and blow them to bits along with literally tons of glass.  It would be nice to identify them and deliver all the crap to their front yards!

Life continues at great speed in our home.  I have been ATVing a few times, Aileen and I have both been typing for the community newspaper and I worked on getting the roof raised on our back lot RV cover.  Being so far from major centers has reared its head with this project.  After much searching, I found a company in Phoenix to buy my 3 inch diameter pipe sections.  We drove there one day to pick them up and with a couple small detours, it was 150 miles round trip, much of it city driving.  That took care of most of that day.  Then I found a place to rent a pipe cutter to cut my 2 7/8 inch existing pipe and it was in Gilbert.  It was 52 minutes to get there when I left here at 6:30 am.   Then of course, we had to return it later.
The actual job went fairly well.  The pipe cutter worked very well but the drilling of the half inch holes proved to be real challenge.  The new pipe I had installed last year was incredibly hard to drill and we went through several bits before finally settling into a systematic approach using certain different bits.  It was very fortunate that one of my helpers was a retired machinist.  My youngest helper was 70.  The others were 75, 76, 82 and 83!  We cut the three pipes on the east side, one at a time, put a larger pipe sleeve on to contain the cut off pipe then raised all three by eight inches.  We had planned on doing the west side which has four pipes but decided we’d gained enough clearance with just the one side.  We backed the motor home in and there was plenty of clearance so we decided that to stop at that.
Aileen made a delicious stew and had made a loaf of gluten free bread in the bread machine which was really tasty.  Only two of the helpers (and one wife) were able to join us for the lunch but Aileen sent soup home with another.
Mitzy and I have been going for hour long walks out in the desert on the days I don’t ride.  On the days I do, I take her on the ATV then we walk for a few minutes.  This is in addition to her several daily walks to the dog park.  I went to Coolidge and sat in the line at the motor vehicle office for an hour one day to renew my ATV licence.  By buying the $25 off road decal first, my ATV licence plate renewal was $4.94, isn’t that a deal?
We went to Ken and Marie’s for Mexican Train Friday evening and I was the lucky one that night.  We haven’t been able to go to the pool every night since the bozos are keeping all the pools too hot for Aileen.  Last night we went and ran the cold water hose into the pool and as long as Aileen stayed close to the end of the hose, she was able to function.  She found a chart online detailing acceptable temperatures for certain activities and conditions and for MS, the recommended high is 84F.  The coolest pool in here last night was 92F!  It isn’t even refreshing to go in the 92 pool after the hot tub.
With having the motor home finally on our lot and plugged in to power, Aileen has been cleaning it.  She had the carpets cleaned yesterday and it was less than half what we paid in Errington last summer.
Posted by John and Aileen on the road at 9:20 AM