BACK ON MY ATV

We had a frosty morning today.  The forecast was for 41 this morning but there was frost on the roofs with a nasty little wind blowing.  I took Mitzy for a ride out back before heading up to meet the group.
I was the leader of six today.  We went to the turquoise mine area then up to the Crown Saguaro.  From there we explored a side wash then went by a sort of mutated crown cactus and over to Box Canyon Rd.  We went up the big wash paralleling the road and found a spot to have lunch.  We continued up the wash after lunch then spotted a trail heading back toward where we had been earlier so we took it.  It brought us out to another wash which we explored for a short distance.  I went further than the rest and actually found an old cat road which allowed me to get out of the wash but it was pretty old and unused.
I decided to head back since Dennis was turning the group around.  Just down the trail, Gene in a Polaris Ranger had somehow broken an axle in loose gravel and his right front wheel was turned 180.  The guys managed to tie the drive shaft up and turned the wheel back into position and he was able to turn around.  The wash we were in actually exited onto Box Canyon Rd right where we had turned up for lunch.  I think Gene was able to drive home with no problem.  He was going good last I saw, but Blue and I went to town for gas.  This was only the second day out for the Ranger as he just got it back from the shop after extensive repairs.  It’s a 2009 with only 1300 miles.  He’s second owner and has hardly used it so he is not impressed.
It was raining quite well yesterday morning and I managed to hold Mitzy off for a time before making the trek up to the dog park.  I went to get Ken and his big ladder, which turned out to be shorter than mine.  We found the RV cover to be about 11’11” at all four corners.  We need to raise it about 6 inches.  Neighbour Phil stopped by and chatted so I asked his opinion on the best method to raise the roof.  He thought Jack’s idea of cutting the posts and putting in a sleeve was best.  After much searching online, I finally found a place in Phoenix where I could buy sections of pipe.  After many phone calls, I finally found a place that rents pipe cutters large enough to cut my 2 7/8” pipe.  It is in Gilbert so I have three trips up to that area in the next few days.  Wednesday to pick up the pipe and check for screen door repair parts for the motor home, pick up the cutter when I get a day set for the work and then return the cutter later in the day.
I’d tried to fix a slight leak in the park model kitchen hot water tap but true to form, it leaked worse after I cleaned the crud out.  The hard water is a killer for our plumbing.   Ken and I went to Casa Grande and bought a new one at Lowe’s.  I installed the new taps when I got home and that went quite well. 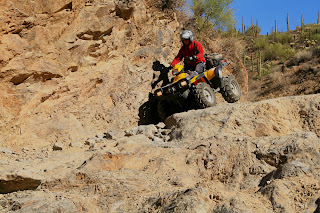 Here's a picture of me coming own what's known as the Water Fall, taken with my camera, by Maureen 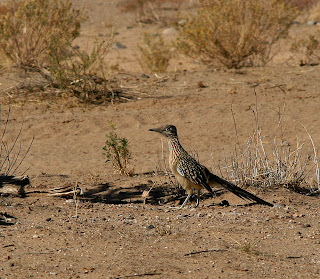 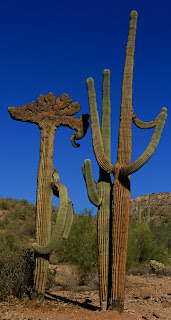 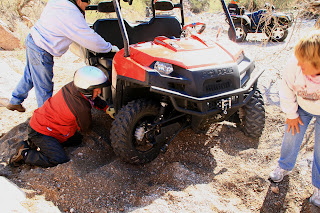 This is not good!  The axle snapped off it appears allowing the right wheel to over center
Posted by John and Aileen on the road at 8:10 PM