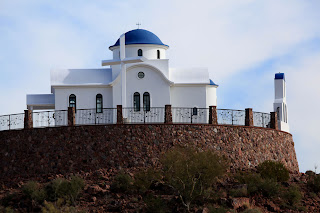 The Prophet Elias' Chapel on the hill above the Monastery 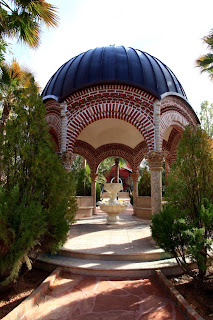 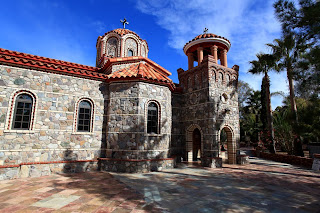 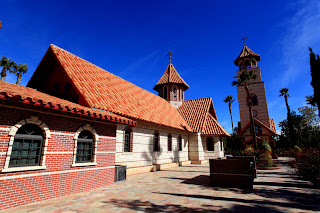 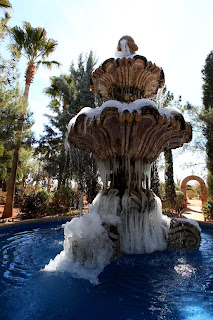 This was the last day of our cold weather and at nearly 11:30 the ice is still with us 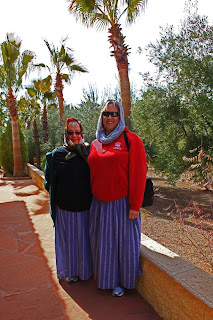 Aileen on the left and Bev (our daughter) in mandated dress. 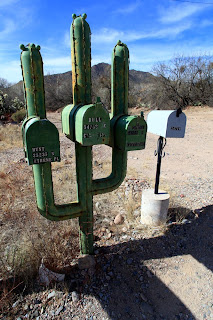 A mailbox in Kelvin, AZ 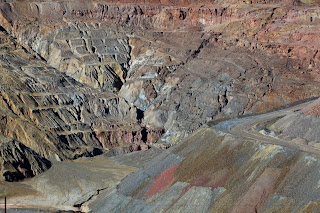 The Ray Copper Mine south of Superior, AZ 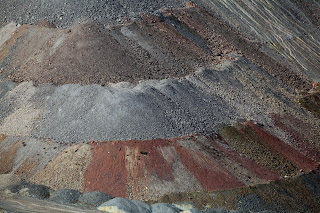 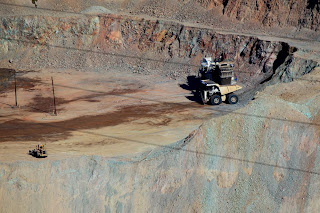 To get some perspective on the size of the truck and shovel (loader), the front end loader on the left is actually a rubber tired dozer with a large blade. Only four buckets full filled the truck 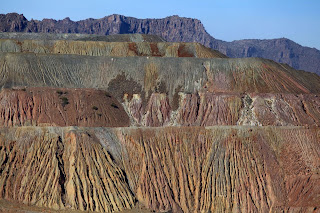 We been enjoying having Bev visit and she has done lots of little projects for us that we had mostly let slide. We’ve played three games of Mexican Train and Aileen has won all three! We’ve made several trips over to Casa Grande for various things and I think had lunch there every time.

On Wednesday morning, I mentioned that my grapefruit seemed rather warm and the pop did too. I then checked the thermometer when Aileen reminded me of it and it was 46F. Awhile later, after turning the dial to cooler, it was even warmer. A little later, the fridge quit completely! Great! Bev and Aileen got chatting with Kathy Richardson down the street who mentioned checking out Brown’s Coolers in Coolidge. By the time Mitzy and I returned from our walk in the desert, Aileen had a list of new and used ones that would fit our opening. Bev and I headed over while Aileen stayed to make the pecan pie for supper. We looked at the used fridges which were $250 and up. They all looked old, tired and junky. I called Sears in Casa Grande but they had nothing on the floor that would work so I bought an 18 cubic foot one at Brown’s. It cost $616 including tax and $35 delivery. They delivered it about 2:30 and took our old one away. We had friends Ken and Marie over for supper and the pecan pie which is Ken’s favourite. Aileen made a gluten free pastry and it has to be the best pastry I’ve ever had. We played Mexican train that night too with that being one of Aileen’s wins.

I’m starting to get this new computer somewhat organized but am having several issues. My ProShow Gold shows won’t load at all, I get a message saying it can’t find the file. I guess I’ll have to contact their help line to see if they have a simple fix. It needs to be simple for me! I’m also having trouble finding a direct path to some of my document files and pictures. I couldn’t be happier with the computer’s performance when it comes to Photomatix and PhotoShop Elements. It is really fast, in fact, I don’t have those little rest times while waiting for something to process that were so plentiful before.

Yesterday we went to St. Anthony’s Greek Orthodox Monastery which is ten miles south of Florence, AZ. If you are in the area, find the time to visit this very interesting place. The architecture and workmanship is fascinating. You can pick up a brochure and wander the grounds on your own or follow along with a guided tour. There is a dress code. Men are to have long sleeve shirts and long pants while ladies are to wear long dresses (well below the knee) long sleeved blouses and head scarfs. They do have skirts and scarves available to borrow. You will see Bev and Aileen wearing them. After leaving the Monastery, we drove out the Florence-Kelvin Highway and then pulled off on the Barkerville Rd to have our lunch. Aileen had packed the makings and we stood at the back of the car and made our own lunches then stood in the sun to eat. It was quite pleasant. We carried on to Kelvin then turned north and went up to Superior. We stopped at the overlook for the huge Ray Copper Mine then later dove through some of old Superior.

Our weather has finally warmed up to be much more pleasant. I went in the hot tub yesterday and today in the mid afternoons. That’s my first time since back in December and I enjoyed it. The pools got so cold even Aileen had to miss a couple nights. Our pool is 82F today so she will be using it tonight. I think our temperatures dropped down as low as 20F and there were several broken water lines in the park with water shooting out. I have been reading other travel blogs from all over the southern US and we fared better than a lot of places. Some RVers were caught in 0F tempertures and suffered total freeze up of their water lines. Others had snow and ice storms to contend with and there was a lot of wind at time as well. Of course when looking at the overall situation throughout North America, we were still among the most fortunate. A lot of the plants both here and in the towns have been badly frosted so we are way down on flowers now. I imagine it will be awhile before there are many blossoms in the desert this Spring.

We are down to less than three weeks before heading north to BC already. We have a lot of things to do before then. I imagine we’ll probably find some winter like weather along the way. We plan to go to Vancouver Island first for about four weeks. My Dad’s celebration of life is now scheduled for April 9 in Errington and after attending it we will then head for Salmon Arm to take care of business and appointments. We haven’t given thought to what’s after that yet, or at least I haven’t.