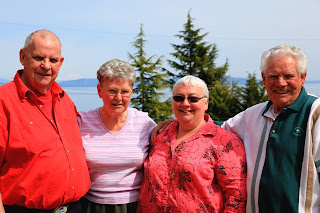 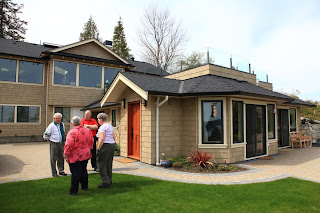 The big house with Pat and Irene's attached 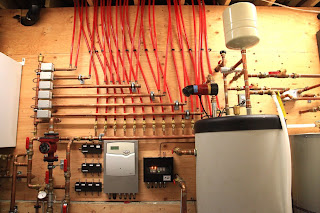 The in floor heating system for both houses starts here 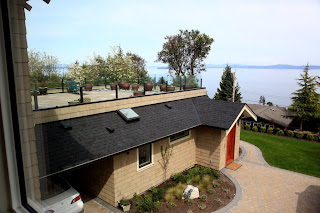 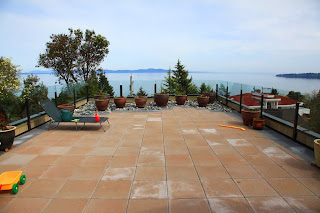 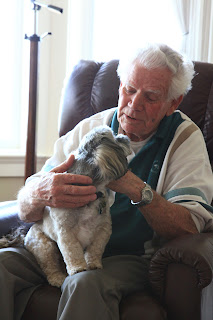 Mitzy and Pat having a conversation 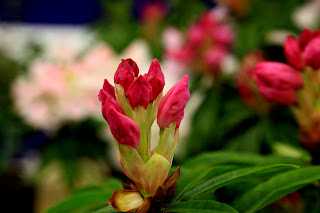 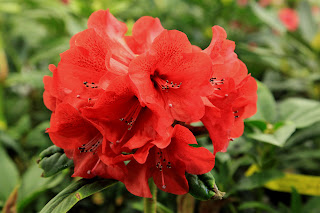 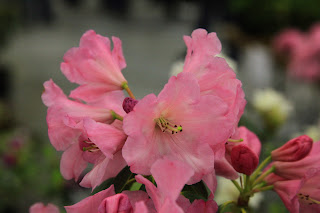 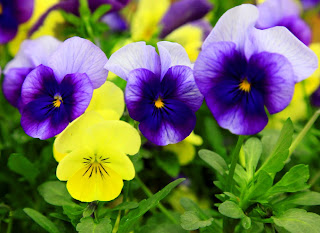 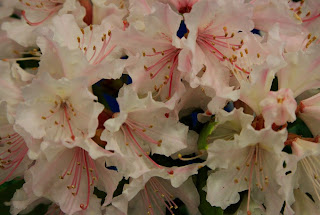 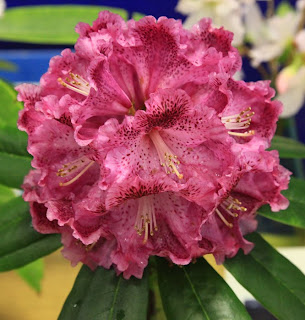 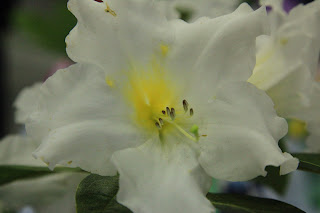 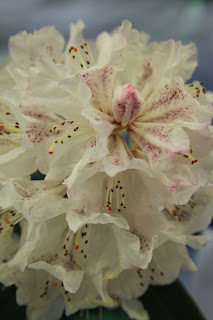 Picking up where we left off last week, we did get to the model railway show and it was quite a large event with groups from all over and several retail shops selling their wares. We visited with Cousin-in-law Bill and his son Tony, also Barbara and Gay & Doug, train friends we met at Gloria’s service last year. I also got a card out and a note written to Ed J, our ATV leader in AZ. He is home in Oxbow, undergoing radiation on his spinal tumour.

On Monday morning we packed up the trailer and got hooked up early so we could continue on to the dump station after dropping Mitzy at the groomer. This is two weeks since we last dumped the tanks so not too bad. We parked in the beach lot at Rathtrevor and had ham and pancakes for breakfast. It was about 9:20 by then. We visited a couple from at the sani dump who had just returned from wintering in . It was their third winter in AZ also. They leave their motor home here in Parksville at a son’s place so are staying in it now. The sani dump fees at the provincial parks have gone from $2 up to $5 now, a 250% increase. The camping fees have also risen by up to $6 per day. Combine that with the April 1st ferry increase for over length RVs and I’m sure lots of people will reconsider even coming to with rip offs like that in place. I have calculated it is going to cost us $40-50 more to leave the than it cost us to get on and that was $193.80! It’s a popular misconception that if you have an RV, you’re loaded with dough!

On Tuesday we took our lunch and went for a drive north of here exploring side roads. We went down to the wharf at and wandered around then had tea at the café. We had more fires here at Charlie's Wednesday and Thursday, Thursday being the last day open fires are permitted so we’re done fire bugging.

I took Mom to art at Joan C’s on Wednesday. I thought I might try some art but Joan thought I should take a former member of the art group, who has just returned to the area, and explore the property. She was an interesting person and we did get along well as she is really into nature ie. plants, rocks, trees etc. We went down to the bottom field, up to the power line and out to to the north of Joan’s. The ladies were starting to wonder if we were lost when we got back. After tea and goodies, I returned Mom just in time for her to slide into her seat at the supper table at 5:02. I had left Dad soaking up the sun in the window area when we went to art. He really enjoys his sun. Maybe that’s where I get it from.

Aileen gave me a haircut Thursday morning then she went to Qualicum to the MS Self Help Group meeting. She reports it was quite interesting and a good turn out. On Friday, cousin-in-law Bill took us to in his van and it was nice to be a passenger all the way. We had alternating sun and light overcast all day so that was great. We visited with Aileen and Gloria’s cousin Pat at his new house until Irene came home then we went to the Howard Johnson Hotel on the for a nice lunch, courtesy of Pat and Irene. After lots of chatting, we went back to their place and had a tour of their daughter Lorene’s main house which is attached to theirs. It was very high end and of course has a great view of the ocean and Mt Baker, barely visible through the haze today. We headed homeward at 4 PM. We stopped at the Old Farm Market south of for veggies then in Ladysmith for a Chinese smorg.

This morning I went to Parksville with Charlie to the big plant show. There were lots of Rhododendrons on display and sales were brisk. We’ve had showers overnight and this morning and now we are getting a heavier shower so it’s a good day to be sitting inside. My sister Wendy called a few minutes ago with an invitation to supper which we accepted. I might get to see all my siblings eventually this trip. Can’t rush these things, you know.

Posted by John and Aileen on the road at 2:37 PM