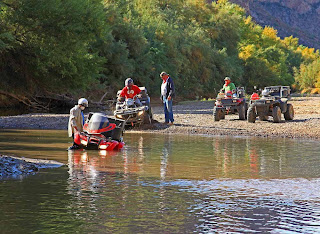 Getting pulled out the first time 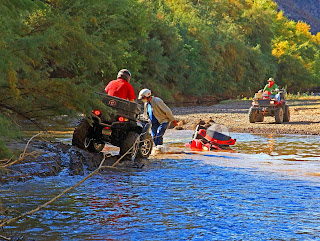 Drove back in the same hole but worse! 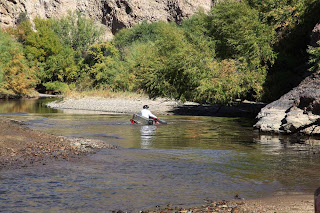 A nice way to treat his brand new machine? Didn't listen to directions of the guide! 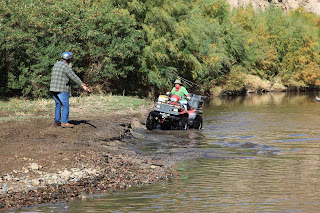 Old Blue is a good listener and had no problem 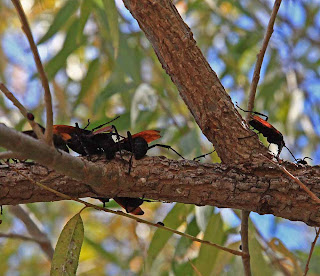 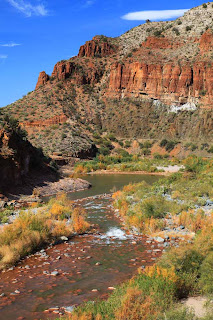 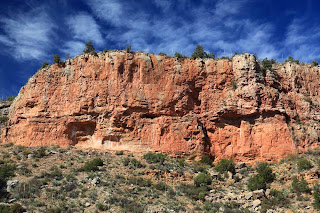 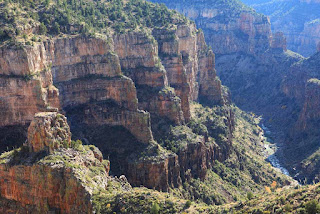 Climbing out of Salt River Canyon 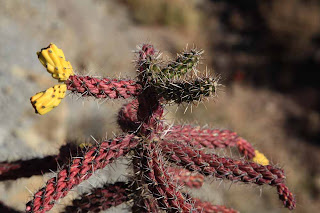 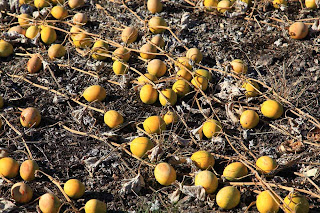 Wild gourds along the road to Fort Apache 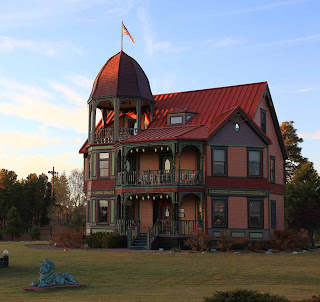 Since I was all legal, I went out with the ATV group on Saturday. There were 16 of us and we had a pretty good time. One guy got stuck in the river and after being winched out backward promptly drove back in the same hole but even deeper. They pulled him forward the next time rather than giving him another chance. One of the other machines was going to go and see why the stuck ATV was taking so long and he got himself sunk too. We had a nice lunch break in the shade along the . After lunch we headed over to an old Butterfield Stage Coach stop where we re-grouped. We were missing one ATV but since he was the type of person who constantly kept heading off on his own, the group wasn’t overly concerned. One chap did go looking for him but that’s like looking for a needle in the haystack. It’s a big area with numerous side trails leading off. The decision was made for the group to head home to see if he made it there. When he didn’t show up after a bit, 911 was called and some members of the group headed out in their Jeep to start searching. They met some people who told them there had been an ATV accident and fatality. It turned out to be our man. It seems he veered off our route up a steep incline and when he went over the top lost control and was pinned under the ATV and likely killed instantly. He was 69 but drove his ATV like a teenager. I was quite concerned at his actions all during the day so his end was not a total surprise, but sad just the same. Apparently he lived his whole life on the edge was the story I got from an off the cuff eulogy given at the ATV potluck last night. From what I’ve been told, there was no way we would have ever found him in the daylight. He was totally hidden from the road. Some fishermen saw lights where there shouldn’t have been any and investigated.

On Sunday, Aileen, Bev and I took a big road trip up to the . From there we went to (not the !) but there was really nothing to see other than a few old brick school buildings that didn’t look too old. From there we carried on to Show Low where it got dark on us, so it was a long drive home in the dark. We stopped in Globe for a late supper.

Yesterday I announced at the Monday morning clubhouse gathering about my episode with the Motor Vehicle Division and my ATV experience so others don’t have to go through the same. I also mentioned my upcoming photo classes and asked for expressions of interest in starting a photo club for the parks. I now have eight signed up for class which is enough. I spent some time yesterday and today editing pictures and saving them to my external hard drive to make more room on my computer. It was almost full again.

Today we had to do another grocery run to Coolidge then we went to Prime Rib supper at the clubhouse. It was pretty tasty! They have it once a month but this was our first time. Bev and Aileen have been busy organizing more travel. We are going to for a boat ride this Thursday. On Friday we are going to to get the first service on the ATV and the girls are going shopping. Next Tuesday they are going on a bus trip to . Then next Friday, we are going to Sedona and probably the for a couple or three days. If that isn’t enough, there’s a ladies clothing and jewelry sale tomorrow and I have a table at the clubhouse garage sale on Saturday morning to try to sell my cards. Then Monday is my first photo class. Ah yes, we retired people don’t have much to do!

Posted by John and Aileen on the road at 7:14 PM