ON THE ROAD, YELLOWSTONE BOUND 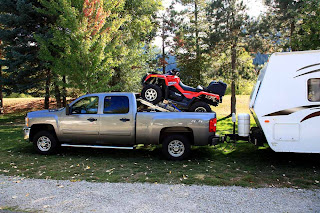 Lots of clearance when the quad is loaded

We leisurely hit the road yesterday morning. Dumped the tanks after giving them a good shake up on the way to town. Just as we finished that, our good friend was passing by on her scooter so we got to give her another hug before leaving. She really wanted to come with us though. She greatly misses winters in ; she and Bill had gone for over 20 years and had lots of fun down there. Next stop was to add a little air to the trailer tires to bring them all up to max. Then we drove by the SPCA to say goodbye to Bev. We’re looking forward to seeing her and Kev down in Caliente just after Christmas.

We went to yesterday planning to stay in the city park. However, they have raised the rates way higher than any of the private parks so we ended up in the Victorian for just over half the cost. This morning we deviated from the Good Sam route and did some new to us roads ending up in along I-90. We will spend all of tomorrow on I-90 and hope to get well over ¾ of the way to . We are just under ½ today. It’s sunny with a few clouds and about 20-22C which is low 70s F. Just about perfect. Yesterday was in the low 30s C (over 90 F) which was a little much. About 3 AM this morning we had a thunder storm with quite a bit of rain. That storm seemed pretty general right down to . However, on the east side of the pass here, they had none.

I have included one image of the quad and the clearance from the trailer for those who have been wondering how it is working. I’m pleased to report it is a great success so far. I did have to tighten up the spring bars one more chain link, which has actually had the benefit of reducing the porpoising even more. Otherwise handling is pretty much the same as before. We were able to make a really sharp turn in J&J’s yard as we left yesterday and the quad didn’t even come close.

While in the city park in , I talked to a couple of ladies from Armstrong and . Because one of their friends had been displaced by a Casa Grande RV park closure, I gave them my card in case they wanted info on Caliente. Before we left, she came over and said one of their friends actually lives in our strata in Salmon Arm. He’s #5, we’re #12. Yup, small world.

Posted by John and Aileen on the road at 5:27 PM