HANGING OUT IN DAWSON CITY, YUKON 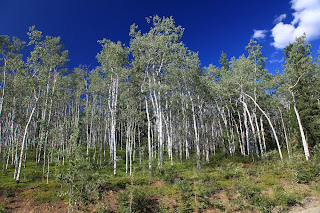 The Poplars here have very white bark and lots of kinks 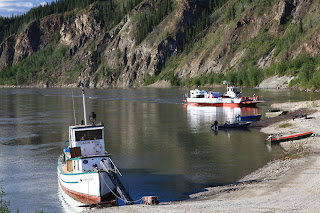 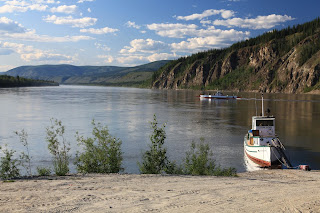 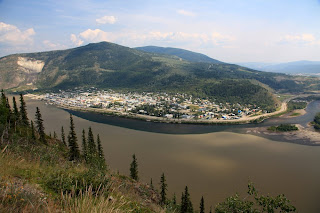 Dawson City from across the Yukon River. Notice the clear Klondike River flowing into the muddy Yukon. 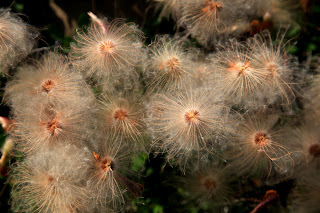 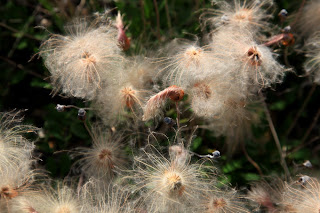 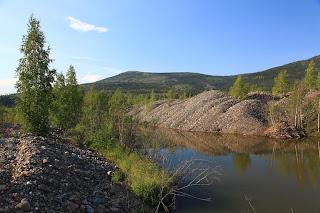 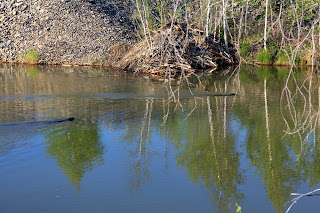 Two beavers and their lodge 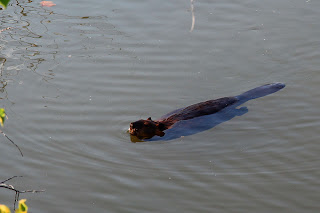 Beaver checking us out 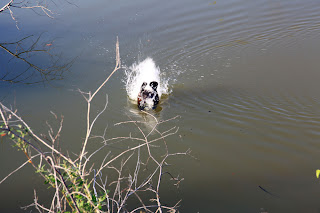 Beaver has just slapped his tail on the water and is diving - that's his backfeet......................................................................................
We cooled our heels in the campsite yesterday morning with Aileen doing lots of laundry then I made my appearance at precisely 1 PM at the repair shop across the road as requested. He said to bring it right in so I did. We lucked out with a creative resourceful mechanic who did a great job repairing the plunger extension rod. He claims it will not come off again – I hope he’s right. I managed to get the flat repaired at the same time. They had a dump station on site so we and the mechanic did the deed and everything worked perfectly. I was very pleased with how much (little) they charged. When we returned to the campground, we put the correct wheel back on the trailer. That was a warm job in the 25C temperature.

We drove into after for a peek around. It is a mixture of old and very old with some new mixed in. Some of the old homes and businesses have been nicely restored but too many are fixed up too much and lose their authenticity. It was still really warm when we drove up to the Dome after supper. The view was pretty good but I need to do it in the morning to get the better light to the west.

This morning we awoke to cloud and smoke. We tried waiting it out with Aileen doing some laundry then cutting my hair. Later we took the ferry across the Yukon River and headed up the Top of The World Highway planning to drive to the border and then back. The further we went the worse the smoke, so we turned up the to the north about 60 km along and followed it for 10 km before stopping for lunch. The smoke was really getting worse so we turned back. At a little side road where we stopped to walk a couple paths, we met two couples from who are working for a gold miner for the summer. One lady is the camp cook, the other drives rock truck. One of the guys drives cat and loader while the other runs an excavator. They’ve only found 1000 ounces so far this year. Two years ago they recovered 3600 ounces. They get two days off every two weeks so they were off to Chicken, for the night. They seemed to be having fun working here. They had all worked in the logging industry in which has been almost wiped out with the current economic situation.

We found a great viewpoint overlooking on the other side of the river on our way back so we sat and enjoyed the view for some time.

Mitzy had her dreaded bath when we got home. She gets very dirty in all this dust. We seem to be able to make and receive phone calls but are again unable to access our voice mail. If you’ve left us a voice mail message in the past week please try us again.

We went for a short walk up a road beside the campsite after supper. There was a bit of thunder happening which cooled it down a little and the wind seems to have cleaned some of the smoke up. The only fire of note I could find online was a new blaze in way south of here. There are lots of dredge piles all over the valley bottom and many of them have water. Several have healthy beaver populations. The one we walked by had four beavers swimming around; a couple showed off for us. I only had my 24-105 lens along so I wasn’t able to get good close-ups. I will post what I was able to come up with.

I’ve been unable to copy and paste from my word doc into my blog since downloading Internet Explorer 8. I downloaded Firefox and was able to copy and paste but my blog wouldn’t post. This time I am trying Google Chrome. I did a mini test run last night and it seemed to work so will try a real post tonight.