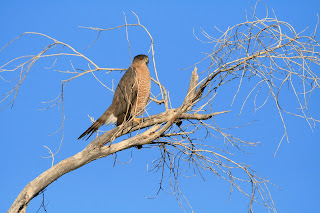 This is a Gray Hawk, I think. He's checking out our trailer. 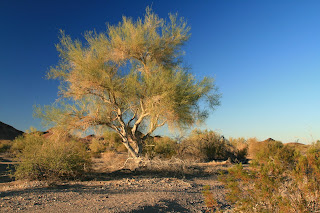 The lovely Palo Verde tree. One of the tallest growing plants in the area. 20-25 feet tall. 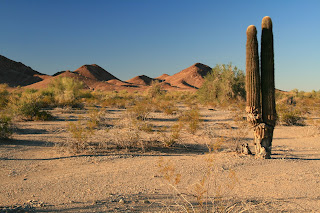 Typical type of area we walk.
Nov 19, 2008
Are we having fun yet? That’s a dangerous question these days. We still have not received a satisfactory answer from Telus on whether we should have wireless internet in the US and now we find that our solar power additions that we paid dearly for before departing Salmon Arm aren’t performing as they should. When we ran out of battery in Gleneden, I put it down to being under the trees and the clouds. Same thing in Errington and Goldstream. Each time our four six volt batteries would last about four days. However, we’re now in pure bright sunshine and our batteries died after four and one half days! There’s a problem somewhere but how to find it. Several calls to the installer had me crawling under the trailer checking fuses buried in its bowels then buying a battery tester and undressing all four batteries. All I’ve learned so far is that yes, all the batteries are low on power. For tonight we’ve moved into Quartzsite and The Split Rail Campsite with full hook ups and tomorrow I must buy a battery charger to get the batteries fully charged so I can test their specific gravity and see if one is defective. If that proves to not be the problem then I guess we’ll be visiting one of the solar dealers here before we move along.
We are enjoying the weather although we spend much of the day seeking the shade. Temperatures are running 28-32C. We do walk morning and evening when the temperature is cooler and most of the hotter part day does have a nice cooling breeze. There seem to be lots of coyotes everywhere and seven quail visited our site every morning and evening. Here at the Split Rail, Aileen said she and Mitzy saw huge numbers of quail on their after supper stroll. All the entry stations for the BLM long stay camping (where we just were) have book exchanges in them and the volunteers who man the stations are very chatty. It’s easy to spend an hour or more listening to the stories and banter. They are usually older men and women from a wide range of backgrounds and from many different parts of the country as well as Canada.
We’ve gone exploring a little in the immediate area and have seen some interesting places. You don’t need to go far to run out of people. There seem to be lots of RVs moving through the area but not a lot staying here yet. There appears to be about the same number heading to Yuma as there are coming from Yuma direction. It’s the same on the I-10 freeway, equal numbers in each direction. Gas is $2.07 here today and I read it’s about $1.75 in Oklahoma so that probably accounts for some of the extra movement. Of course our dollar is getting pretty beat up again so we’re paying considerably more when the exchange is factored in. We splurged tonight and went to the Mountain Quail Cafe for a tasty supper. We’ll probably be here another night in order to get the batteries fully charged so will join the park people in their regular Thursday potluck supper. As soon as we can, the plan is to move on to near Wickenburg for a couple nights then on to Florence.

Posted by John and Aileen on the road at 8:18 PM