Exploring and sitting out the rain 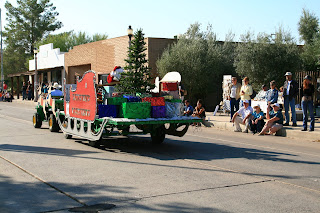 Here's Aileen waving to Santa. Wendy & Randy beside her. 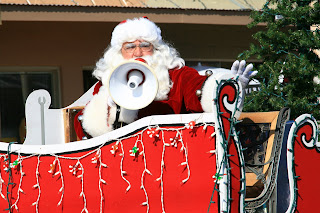 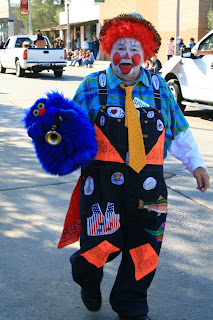 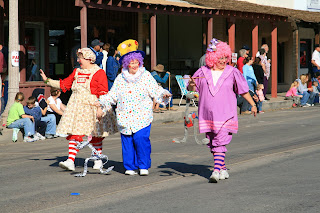 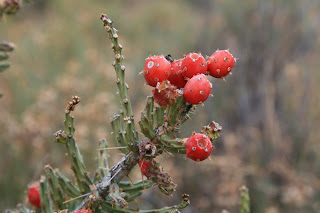 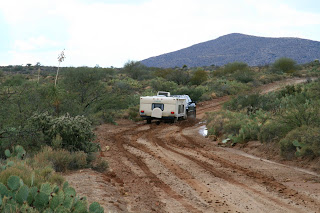 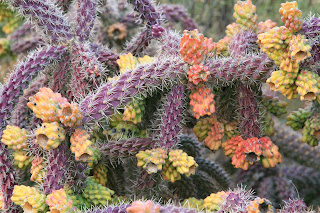 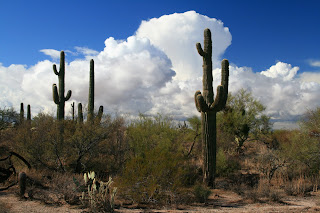 Morning light.
On Wednesday we had 1/4 inch of rain and Thursday gave us another ½ inch. That’s quite a bit considering they only get 7-8 inches per year in this area. It’s amazing what happens to all the water as it doesn’t just sink into the ground but instantly becomes a roaring torrent. That’s how they get flashfloods in a hurry. The streets in the park slope to the centre and there’s quite a river runs down it. Surface drainage must be taken into account very early in the planning process when property is developed. Out in the desert, the roads get damaged a lot in these rains. I guess because the rain is so infrequent they don’t worry about it and just send a grader out to repair the damage. That’s one thing about this whole area; it’s all sand or gravel so the material is always there to smooth over. Every little gully has its flow of water and they keep joining others and increasing in size. Some of the washes (that’s what they call these temporary creeks) can get to be 80 – 100 feet wide and move a lot of water.
We drove the Florence-Kelvin Rd on Thursday and some of the washes were still muddy and a little tricky. When we drove north from Kelvin we passed the Ray Copper Mine which is huge. We drove along it for several miles; it’s amazing how much rock they have moved over the years. We drove through the old town of Superior at the junction where we turned west and it is in serious trouble. Over half the stores and offices are empty. It was a fairly substantial town in its time but now with the better roads is only 30-40 minutes from greater Phoenix shopping.
We had to be home in good time as we’d bought tickets for the Thanksgiving supper. 336 people were fed buffet style in nine minutes! The lady announcing said we’d all be fed and seated in less than 12 minutes and we’d said “yeah, right”! It was a very good feed but lots of people’s blood sugar got pretty elevated. After supper a professional couple did a musical skit on the 1940’s which had the guy going to war and the girl working for the war effort and finally their reunion. Their singing was excellent.
On Friday (Nov 28) we drove south of Florence and took the 96 Ranch Rd. The washboard for the first few miles was incredible! The sun had come out and we expected a warmer day but the clouds came back and the temps dropped down as low as 11C mid afternoon. The 96 Ranch was so called because they owned 96 sections of land. That’s 61,440 acres. The buildings were all abandoned and the road wasn’t much better. Some of it in the hills was bare granite shelves to drive on and there has been no maintenance on it for years. Some spots were washed badly and the brush was growing in on the sides. After passing through the 96 Hills and back into the desert on the east side we encountered some nasty mud holes. I was surprised to watch a guy with an old Suburban and a telescopic travel trailer blast through it after I’d clawed through in four wheel drive. Guess he was used to such things. We joined the Barkerville road and looked for the old community of Barkerville but found no sign of it at all. We took the Freeman Rd back west to #79 and home to Florence.
This morning we went with Wendy & Randy to the Florence Parada which I guess is Spanish for parade. It was a pretty good parade done fairly leisurely. The weather was sunny but not too warm, so perfect for both participants and spectators. After lunch we took a drive about 20 miles toward Phoenix to do some shopping. We still visit the pool and hot tub every evening after supper which makes a pretty nice end to the day. It is supposed to be sunny for the next several days and I hope they’re right.